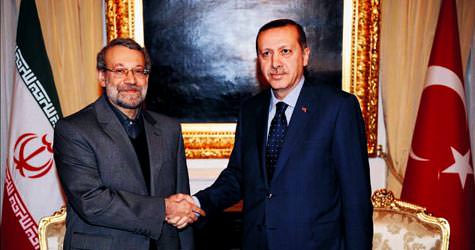 Meeting with Iraq’s Sunni Speaker of Council of Representatives of Iraq Nujayfi, Prime Minister Erdoğan delivered a message to Baghdad: “Those who seek out or do not obstruct a sectarian war, will never be able to recover from such a plague.”

Prime Minister Tayyip Erdoğan spent his work shift yesterday dealing with Iraq, which is currently suffering from sectarian strife following the withdrawal of U.S. Troops. What started with U.S. Vice President Joe Biden, continued with the telephone conversation Erdoğan held with Maliki and now yesterday the Prime Minister met with Iraq's Sunni Speaker of Council of Representatives of Iraq Usama al-Nujayfi. Arriving in Ankara in order to receive medical treatment for a health condition, Nujayfi was also welcomed by Erdoğan at the Prime Ministry Official Residence, where they met for an hour and five minutes.


'THE ENTIRE REGION WILL BE AFFECTED '

During the meeting, which was closed to the public, Erdoğan relayed to Nujayfi the topics discussed during his telephone meeting with Iraqi Prime Minister Nouri al Maliki on Tuesday. Erdoğan expressed that he understood the unease felt by Sunnis in Iraq, and was closely tracking the developments in connection to increasing Sunni-Shiite tension. Erdoğan stated, "For us, Iraq is like Syria. Any sort of conflict to erupt from there would affect the entire region. We cannot remain indifferent to the developments." Emphasizing that the Baghdad administration is obligated to prevent tension rising in Iraq, Erdoğan stated, "Those who seek out or do not obstruct a sectarian war, will never be able to recover from such a plague."

Erdoğan later spoke over the telephone with another influential Iraqi political leader Iyad Allawi. Erdoğan and Allawi also discussed the sectarian strife in Iraq and Erdoğan expressed his concern that an antidemocratic and sectarian approach in Iraq could drag the nation into chaos. Drawing attention to the fact that if the tension in Iraq continues to rise, the nation could be dragged into civil war which would have regional repercussions, Erdoğan reminded of importance of reestablishing dialogue and trust between sides.
Erdoğan expressed that Turkey wants peace, democracy, stability and prosperity in Iraq, and stated, "We will support all Iraqi politicians that serve these intentions."

Speaker of the Turkish Grand National Assembly TBMM Cemil Çiçek hosted Iranian Speaker of the Parliament Ali Larijani in Istanbul who conveyed that holding nuclear negotiations with the P5 + 1 (Five permanent members and Germany) in Turkey was favorable. Paying a visit to Turkey at a time when tension is on the rise between Tehran and the United States, Chairman of the Iranian Parliament Ali Larijani attended a series of meetings in Ankara. Throughout the course of the day, Larijani met with Foreign Affairs Minister Ahmet Davutoğlu, Speaker of the Parliament Cemil Çiçek, President Abdullah Gül and Prime Minister Tayyip Erdoğan and later held a press meeting at the Iran Embassy, where he relayed the following messages: "The target of the missile shield must be defined. However, we have trust in our Turkish friends. We have reasons that show that the radar system is not in favor of Muslims and we must pay close attention to this. These issues need to be enlightened through negotiations." Larijani also stated that he does not perceive the danger of sectarian conflict in Iraq. "We do not see a problem between the Sunnis and Shiites. The problem is in the politics. This is an issue with both the Sunnis and the Shiites in Iraq. Some try to portray this as a sectarian conflict and try to hide what is real."