Rauf Denktaş's final words were “this is an independent republic” 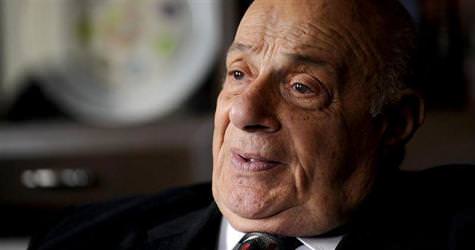 Founding President of the Turkish Republic of Northern Cyprus Rauf Denktaş has passed away at the age of 88 in the hospital he was receiving treatment in Nicosia. Denktaş will be buried on Tuesday with a state funeral held in his honor.

On January 8th, Denktaş was admitted to the Yakındoğu University Hospital for dehydration. After five days of treatment, the legendary leader's condition worsened in the evening hours the night before last. Denktaş's internal organs were not functioning sufficiently, and the leader's condition became critical yesterday morning when he was placed on a respiratory machine and on dialysis in the evening.

The news of Denktaş's death was released at a meeting held by his son and Democrat Party Chairman Serdar Denktaş, President Derviş Eroğlu and Prime Minister İrsen Küçük at around 22:00 last night at the Yakın Doğu University Hospital.

Chief Physician Erkmen described Denktaş's death by stating, "After receiving intensive and successful treatment, our founding President, who suffered from both a cardiac and respiratory problem and coupled with his age, was only able to go on for another eight months. Unfortunately at 22:00 tonight, he passed away." Denktaş's son Serdar Denktaş stated, "My son may have left children behind, however he is also now embracing the three children he has lost."

When Denktaş's medical condition turned critical, Turkish Republic of Northern Cyprus President Eroğlu, Prime Minister Küçük, Cyprus Turkish Peace Forces Command Lieutenant General Adem Huduti and a number of ministers arrived to the hospital. Denktaş had suffered a brain hemorrhage on May 24th and was paralyzed on his left side. He was discharged on October 29th which was the first time he went outside. Denktaş had referred to his situation at the time by stating, "They said I was dying, and now here I am outside." In August, Denktaş had undergone an operation at GATA and had another operation in September in Cyprus.

He devoted his life to Cypriot Turks…

Rauf Denktaş was born on January 27th, 1924 in the Cypriot region of Baf. In 1957, Denktaş saw that the Brits had plans to hand over the island to Greece within five to ten years time and took on a de facto role alongside Dr. Fazıl Küçük.

In response to attacks by the EOKA underground organization which was sent in and run by Greeks in Athens, Denktaş, along with two friends, formed the Turkish Resistance Organization (TMT). In 1959, Denktaş also played a role in establishing the Zurch Agreement. After the 1963 events, Denktaş went to Ankara. Later, he returned to Cyprus by boat and began reforming the Turkish Resistance Organization. In 1964, Denktaş's entrance to the island was prohibited by Makarios following the London Conference. Denktaş continued to secretly assist in the war. In 1967, Denktaş was arrested while attempting to secretly enter the island. After intensive efforts, Denktas was returned to Turkey. After the 1974 Peace Operation, Denktaş was elected state leader twice in both 1976 and 1981. Without fail, he always protected the rights of Turkish Cypriots. Finally, on November 15th, 1983 with the Unilateral Declaration of Independence of the Turkish Republic of Northern Cyprus, the republic was established.

This is an independent republic…

Spending the night next to her father, Denktaş's daughter Ender Vangöl explained what happened prior to Rauf Denktaş being hooked up to the respiratory machine. Vangöl explained that even when he couldn't breathe, he kept singing the song "No one can ever love you the way that I do," to his wife Aydın Denktaş. Vangöl also said that her father began to speak in Greek, upon which she told him she didn't understand and that he should speak in English or Turkish. Vangöl explained that what followed was her father referring to the Greek Cypriot administration leader Demetris Christofias, when he said, "Tell them, this is an independent republic," and then he yelled out, "Christofias".

Denktaş will be buried on Tuesday following a state funeral ceremony, anticipated to be attended by President Gül as well as a number of other high level officials from Turkey.