Erdoğan: “We live in harmony with Armenians and no one can change this” 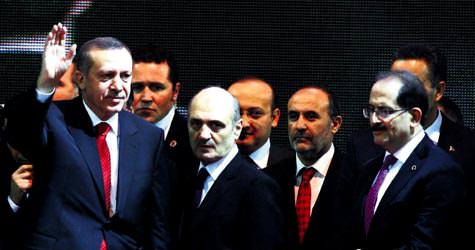 Referring to the court ruling on the Dink case, Prime Minister Erdoğan stated, “No one needs to have any concerns, the Dink case will not become lost in Ankara’s deep tunnels. A single bullet in Şişli will not quiet the Sarı Gelin Türkü, a traditional song sung in six different languages, including Turkish and Armenian.

Prime Minister Tayyip Erdoğan was speaking at the North Ankara Urban Transformation Project drawing held at the Ankara Arena Sports Hall, when he remarked on the recent ruling on the trial for the assassination of Hrant Dink the editor-in-chief of Agos newspaper.

"We have exposed Ankara's deep relations with criminal organizations that have been embedded into their veins. We have not allowed for this awkwardness in Ankara to infiltrate our veins. Ankara's heart is with Uludere. Ankara is no longer shortsighted and unable to see beyond its own borders. Meanwhile, it is also not so farsighted as to only see Gaza, Somalia and Damascus, while remaining blind to what is happening beside them. No one should have any concerns when it comes to the Hrant Dink trial. As in the past, this case will not become lost in Ankara's deep tunnels, nor can it be. Turkey is no longer the Turkey it was. No one will be able to get away with anything. No longer will any set-ups, conspiracies or provocation remain under wraps. A single bullet shot in Şişli will not silence the 'Sarıgelin Türkü', a traditional song sung in six different languages. This was not an unsolved case. The murder was investigated immediately and concluded within 32 hours.

In this country, whatever the judicial system dictates is what is enforced. If this is not the case, then we will personally sign onto all of these responsibilities and we will leave. Everyone must know that this country has legislation and judiciary power. At times you may call it a dictatorship, you may call it democracy. We know that in democracy there is a division of powers principle and we will do whatever it deems necessary. I hope that during the appeal process, all judicial suspicions will be eradicated, and a step will be taken towards easing the public's consciousness. No crime will remain in the dark as no murder will remain unsolved. Civilian rule in this nation will find us and our great nation standing before it and against all fascism, racist and discriminating interests of the PKK, the KCK and the BDP."