Ship sinking after collision in Bosphorus 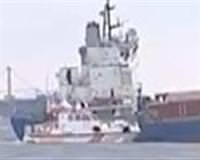 Thirteen crew members of a cargo ship involved in a collision in Turkey's Bosphorus strait, one of the world's busiest waterways, were evacuated on Friday as the vessel was in danger of sinking, shipping agency GAC said.

The Bosphorus remained open to shipping after the stricken vessel, MV Kayan I, was towed clear of the narrow strait, which passes through Istanbul and links the Black Sea to the Mediterranean, the agency said.

The strait is a vital artery for oil trade, and fears of a potential environmental disaster have prompted Prime Minister Tayyip Erdoğan to propose a mega-canal project to bypass the city.

The Kayan I, a 5,644 deadweight tonne (dwt) Sierra Leone-flagged vessel, collided with the M/V Adriablue cargo ship during strong winds in the southern part of the Bosphorus.

The Adriablue sustained damage to its accommodation section.

Tugboats towed Kayan I to a secure location off Zeytinburnu, in the Marmara Sea south of Istanbul, where with the aid of support vessels it was held afloat but was steadily sinking lower in the water, having been holed in the stern.

"It's still taking water, and it seems to me that it will eventually sink," Faik Imdadoglu, a GAC official, told Reuters.