Turkey tells France 'It is not your place' 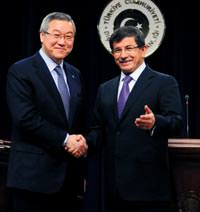 Foreign Affairs Minister Ahmet Davutoğlu sent a message to President Nicholas Sarkozy and Paris just days prior to the bill foreseeing criminalizing the ‘denial’ of Armenian allegations is to be put to the French Senate, by stating, “This is not your place”.

Speaking at a press conference held following a meeting with South Korean Minister of Foreign Affairs and Trade Sung-Hwan, Davutoğlu referred to a letter once penned by Sarkozy to Prime Minister Tayyip Erdoğan and stated; "It is normal for leaders to write letters to exchange their views. Our stance is clear. The ruling that resulted from the significant difference in votes at the Regulations Committee has reaffirmed the justification of Turkey's stance.

We expect Mr. Sarkozy, his party and the French Senate to be respectful of European values. It is not France's place to make such an assessment on history as a third party. It's not right and it's not just. First and foremost, Sarkozy needs to confront its own history. We invite each French senator to spend some time alone to contemplate before making this decision. Because that decision they make will be a black stain on France's intellectual history. We will be reminding them of that black stain every single moment."