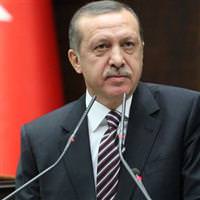 Prime Minister Tayyip Erdoğan attacked the French parliament on Tuesday for passing a "discriminatory and racist" bill which makes it illegal to deny Armenian allegations of so-called 'genocide'.

However, Erdoğan said there was still hope that NATO ally France "would correct its mistake" and that any retaliatory measures would be held back, depending on French actions.
The French Senate approved the draft law on Monday, which the lower house also backed in December, prompting a furious response from Ankara.
"We will not allow anyone to gain political benefit at the expense of Turkey; the bill which was passed in France is clearly discriminatory, racist," Erdoğan said.
"We will adopt a rational and dignified stance, we will implement our measures step by step. Right now we are still in a period of patience," he told his AK Party's deputies in the Turkish parliament.
The bill now goes to President Nicolas Sarkozy to be ratified. Sarkozy is accused of trying to win the votes of 500,000 ethnic Armenians in France in the two-round presidential vote on April 22 and May 6.
As Erdoğan spoke, a couple of hundred protesters gathered outside the French embassy in Ankara and consulate in Istanbul.
Many Turks see the bill as an insult to their nation, a travesty of history and an infringement on free speech.
French Foreign Minister Alain Juppe, who was personally against the move, said the new law was "ill-timed", but called on Ankara to remain calm.
"We need good relations with it and we need to get through this excessive phase," Juppe said on Canal+ television. "We have very important economic and trade ties. I hope the reality of the situation will not be usurped by emotions."
Some Turkish newspapers listed possible measures that Ankara might take against France.
These included the recall of its ambassador from Paris and telling the French ambassador to go home, reducing diplomatic ties to charge d'affaires level, and closing Turkish airspace and waters to French military aircraft and vessels.
Speaking shortly before Monday's Senate vote, Erdoğan said the issue of future official visits to France would be thrown into uncertainty if it passed the bill.
French firms stand to lose out in bids for defense contracts and other mega-projects such as nuclear power stations.
Turkey could also seek to trumpet allegations that French actions in Algeria in the 1950s and 1960s were also tantamount to a genocide.
The mayor of Ankara has spoken of renaming the street where the French embassy is located to Algeria Street and erecting a memorial to Algerian victims of French colonial oppression in front of the embassy.
When the lower house backed the bill in December, Ankara cancelled all economic, political and military meetings with Paris and briefly recalled its ambassador for consultations.
Sarkozy is expected to ratify the bill before parliament is suspended in February before the presidential election.
However, it could still be rejected if about 60 lawmakers agree to appeal the decision at France's highest court and this body considers the text unconstitutional. The Constitutional Council would have one month to make its decision.
Analysts believe Turkey might delay announcing measures to see how Sarkozy handles the process.
Turkey's ambassador in Paris, Tahsin Burcuoglu, said the vote would lead to a "total rupture" of relations between the two countries and Ankara could seek to downgrade its diplomatic presence in the French capital.
Turkey cannot impose economic sanctions on France, given its membership of the World Trade Organisation and its customs union accord with Europe, but French firms could lose out on state-to-state-contracts, notably in the defense sector.
France is Turkey's fifth biggest export market and sixth biggest supplier of imports of goods and services, and bilateral trade was $13.5 billion in the first 10 months of last year.
The influential Armenian diaspora in France and the United States has relentlessly lobbied for international support to bring Turkey to account over the mass killings. However, Ankara argues there was heavy loss of life on both sides during fighting in the area.
Their success in France will encourage those in the United States to try harder in their annual efforts to get Washington to call what happened a 'genocide'.
U.S. presidents have so far ensured that those efforts have been blocked to avoid alienating Turkey, an important regional ally. However, President Barack Obama faces re-election this year and could come under more pressure from the Armenian lobby, analysts say.
Some ethnic Armenians in Turkey saw the French move as unhelpful, while saying wounds needed to be healed.