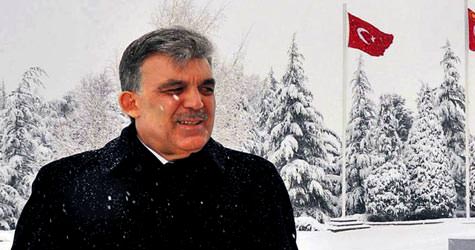 Commenting on claims that Hamas may open a political bureau in Turkey, President Gül states, "Where collaboration between Turkey and Hamas is headed is something we will see in the future.”

President Abdullah Gül responded to questions regarding allegations Hamas may open a political bureau in Turkey by expressing that Turkey is one of the strongest supporters of the Palestinian cause, and stating; "Where collaboration between Turkey and Hamas is headed is something we will see in the future."

President Gül was answering questions by the press at Ankara's Esenboğa Airport prior to his departure for the United Arab Emirates, when he offered his assessment of news recently surfaced in the media of Hamas' intentions to open a political bureau in Turkey.
Reminding that Turkey is one of the strongest supporters of the Palestinian cause, President Gül stated, "Hamas is a political formation which has entered and won elections in Palestine's Gaza region. Their connections with Turkey have continued long since. It is within this framework that a variety of visits take place. However to what level cooperation will reach as a result of these visits is something to be seen in the future."

Gül was also asked questions regarding the indictment on the 'Lighthouse' case prepared by the Sincan Chief Public Prosecutor and the request for suspects Nadi Türkaslan, Mehmet Tamöz and Abdulvahap Yaren to be sentenced. Gül pointed out that it wasn't right to discuss the judiciary and stated, "Because everything will transpire in a transparent manner, if there is an issue of any error this will be discussed by the public anyways. It will be openly evident. The justice system is what everyone needs to pay the most attention to."

1071 ELEVATION HILL
Gül also responded to a question regarding a series of photographs shared on his Facebook account in which he is walking in the snow at the Çankaya Palace.
Mentioning that the Çankaya Palace is referred to as the "864 elevation hill' Gül said, "The Presidential Çankaya Palace is located on Ankara's highest hill. Therefore, let me just say that this location has an altitude of 1,071 meters. The public tends to say different things; however this is a meaningful figure. When it snows in Ankara, of course the highest snowfall is seen here. Yesterday there was the most beautiful view as I was headed for the Friday prayer. Friends said, 'Let's take some photographs'. They must have added them on Facebook, they said they would and I told them to do so."