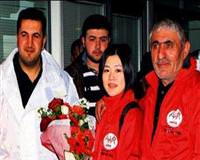 Miyuki Konnai a Japanese aid worker who was recovered from the rubble of what was the Bayram Hotel in the Van earthquake was greeted with flowers upon her return. Konnai states, “I am home again.”

Miyuki Konnai was an aid volunteer for the Association for Aid and Relief (AAR) when she was trapped under the collapsed Bayram Hotel following a second powerful earthquake which hit the already rattled Van province. Konnai, whom first came to Van following the October 23rd earthquake, was working alongside Japanese doctor Atsushi Miyazaki to assist the area's earthquake victims. Konnai was recovered injured from the rubble of the Bayram Hotel, where she was staying when a 5.6 magnitude earthquake rattled the region on November 9th, 2011. Unfortunately Japanese doctor Atsushi Miyazaki did not survive.

Miyuki Konnai has since returned to Van to resume her aid efforts and she was greeted with flowers at the Van Ferit Melen Airport by other AAR volunteers, the Van Governorship Emergency Situation team as well as by teams from the Provincial Department of Emergency and Natural Disasters Search and Recovery Teams, which were the ones who pulled her out from the rubble. Upon her arrival Konnai expressed to members of the press how pleased she was to be returning to Van.

Explaining with the aid of notes and other aid workers that she has returned to complete her work left undone, Konnai stated, "I am at home now. I have recovered completely and I am ready with all of my energy to resume my work at AAR. I want to thank you very much for all you have done for my valuable colleague Miyazaki. I will never forget it. It was not only my intentions to join AAR's efforts in Van; it was also Miyazaki's wishes."