Turkish flag sent to the moon provides inspiration to children 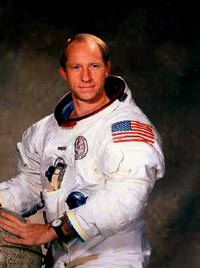 A Turkish businessman who lives in the United States has purchased the Turkish flag that was sent up to space in 1971 in the Apollo 15 spaceship. Ekmel Anda has purchased the flag from an American collector and will be bringing it back to Turkey 41 years later.

Ekmel Anda, a Turkish businessman who resides in the United States, has purchased the Turkish flag that embarked on a 1.4 million mile journey into space from an American collector and has announced that he will be donating the flag and its authentic certificate to the Istanbul Toy Museum.

On July 26th, 1971, the Apollo 15th took off on a journey into space, returning to earth on August 7th. The Turkish flag participated in the trip to space from the space ship module logging in 295.2 hours of travel on a 1.4 million mile journey followed by three days on the moon. The flag's original certificate was signed by none other than Alfred M. Worden, one of the three astronauts on board the Apollo 15.

Turkish businessman Anda has announced that following years of pursuit in the United States and after extensive effort, he has purchased the flag and will be bringing it from New York to Istanbul next week.

Anda stated the following: "The historical flag and its authentic certificate prepared by astronaut Alfred M. Worden will be displayed at the toy museum founded by Sunay Akın. I believe that our flag, which has gone to space and back will provide inspiration for Turkish children and will strengthen their sense of vision. I am sending this flag to Turkey in order for Turkish children to be able to realize their own dreams one day."

"There is a moon on our flag, however it wasn't us who was able to take it there," states Sunay Akın. "The majority of space-oriented toys were produced in the United States in the 1920's. We will be displaying this flag that was gifted to us by our brother Ekmel in the museum's space room. Our visitors will have the chance to see that they can pursue their own dreams of the future."