‘Turkey is a model for Arab nations’ 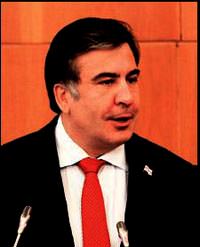 Georgian President Mikheil Saakashvili states that Turkey is a model for Arab nations and also supports the people of these countries.

During an address made by Saakashvili at the 48th Munich Security Conference, he stated that the iron curtain that existed between Turkey and his nation during the Cold War has since lifted, the borders have been opened and citizens are now mutually able to enter both nations without visas.

Saakashvili pointed out that Georgia and Turkey share a dam located on the border as well as a number of joint projects, and went on to state that in our day, Turkey is an example for Arab nations. "Turkey is a model for Arab nations and also supports the people of these countries."

Nobel award-winning female journalist from Yemen Tavakkul Karman also spoke at the conference in which she strongly criticized Russia and the Republic of China's veto of the U.N. Security Council ruling and noted that to not condemn an administration that persecutes their own people is a shameful situation.