PM Erdoğan warns Assad, ‘You reap what you sow’ 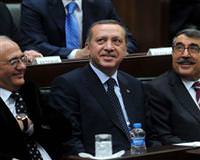 Expressing that he wants the bloodshed to end, Erdoğan told Bashar Assad “The path you are on is not a path” and warned him in Arabic, “Ya Beşar! Men dakka dukka (You reap what you sow)."

During yesterday's AK Party Group meeting, Prime Minister Recep Tayyip Erdoğan devoted a significant portion of his speech to discuss the increasing violence in Syria and to address the administration under Bashar Assad.

Telling Assad, "The path you are on is not a path", Erdoğan went on to state, "I am calling on Assad once more, and this time in a manner he will comprehend, in his own language, 'Men dakka dukka' (You reap what you sow)."

During the group meeting Erdoğan delivered the following statements directed at Syria:

DEFYING THEIR BROTHERS
* Thirty years ago on February 2nd, 1982 our border neighbors Syria experienced a painful massacre in the city if Hama. The Syrian military killed 30,000 innocent people in what seemed an attempt to erase the city from the map. The international community remained silent. That same year, nearly 4,000 Palestinians were killed in the Sabra and Shatilla camps and once again the international community remained silent. Why? Because those that died were Muslims, Palestinians, Syrians and Middle Easterners.

* Who killed the one million solders and Muslims in the Iraq-Iran war? Did the Westerners come and do it? Who massacred the Kurds with chemical weapons? Zionists? No! It was tyrants who claim to be Muslim but instead pound their iron fists on their own brothers. However, these persecutors, these tyrants got what they deserve.

* Assad's father did not pay the price in this world for brutally murdering 30,000 innocent people. However, he was judged in people's hearts and has written his name down in history as a ruthless dictator. I hope and I believe that those who follow his path today, who massacre hundreds of innocent people in Homs, will have to account for what they have done in front of their own people before serving divine justice.

* Syria is not just an ordinary neighbor for us. Starting from Cilvegözü to Aleppo, from Hama, Homs to Damascus, on each step and for kilometers of fraternity you can see the tracks of our joint history."