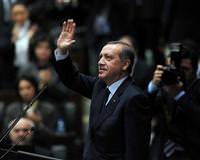 According to Ankara’s plan for a solution to the Syria issue, a summit of “Syria’s friends” will meet, similarly as in the Libya model, and action will be taken in conjunction with the Arab League.

When the highly anticipated U.N. Security Council ruling was not accepted, and violence in Syria and especially Homs under the Assad regime persisted, Turkey decided to take matters into its own hands.

During a group meeting yesterday, Prime Minister Recep Tayyip Erdoğan delivered signs of a new initiative to act in conjunction with countries that will stand beside the Syrian public. Accordingly, the first stage, which will be similar to the Libya model, has Turkey aiming to bring together countries that are in favor of reaching a solution in Syria. At first a table of 'Syria's friends' which will consist of primarily Arab League nations will meet, followed by a more comprehensive meeting with EU nations and the United States. If the international deliberations reap fruitful then future plans will involve a conference in Istanbul.

Erdoğan referred to Turkey's diplomatic policy which has since followed the U.N. fiasco at yesterday's AK Party Group meeting by stating the following;

"As Turkey we will continue to stand by our Syrian brothers and will continue to raise our voices against massacres. We will continue to exert efforts to establish peace and stability in Syria. We are in preparation now to begin a new initiative with nations that will stand by the Syrian public and not its administration. We will also continue to offer our support to the Arab League's efforts in Syria."

DAVUTOĞLU HEADED FOR THE U.S.
Foreign Affairs Minister Ahmet Davutoğlu is headed for Washington tomorrow. Davutoglu is scheduled to meet with both U.S. Secretary of State Hillary Clinton as well as U.S. Vice President Joe Biden and will also spend time with senators from both the Republican and Democrat Parties.

Davutoğlu's main agenda will be to discuss Assad stepping down prior to any military intervention, which is what both countries are partial towards. Turkey, which is expected to participate in the group meetings, will wait to see what Russia's stance is after Foreign Affairs Minister Sergey Lavrov visits Damascus.

Davutoglu will also request that Washington exert increased pressure on Iraqi Prime Minister Maliki, and will discuss the measures in place against the PKK in Northern Iraq.
Turkey continues to exert efforts for negotiations between the P5+1 and Iran, however will not be involved actively as a mediator as Turkey has done in the past.