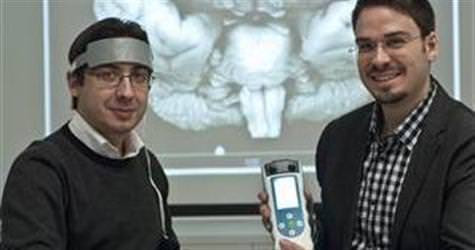 The Infrascanner, a life saving apparatus, which can instantly detect the presence of cerebral bleeding and was invented over a five-year period by Dr. Hasan Ayaz and Dr. Kurtuluş İzzetoğlu, is being financed by the United States Army.

Turkish scientists at the Philadelphia Drexel University's Optic Brain Imaging Laboratory have signed on to a revolutionary invention in medicine.

SABAH speaks with Dr. Hasan Ayaz and Dr. Kurtuluş İzzetoğlu, the innovators of a handheld device that can detect the presence and location of bleeding in the brain.

The two Turkish academic scientists explain that soon the device they have innovated will be found in every ambulance throughout the world and explain that thanks to the mobile device it will now be easily possible to determine whether a patient is suffering from bleeding in the brain following trauma at the site of the accident without having to transport the patient to a hospital which has a tomography machine.

FINANCED BY THE U.S. ARMY
With this six million dollar project, financed by the United States Army, cerebral bleeding will now be able to be instantly detected on site with the use of a device the size of a cellular phone. Dr. Ayaz explains that significant funds were used for clinical trials to determine the accuracy of the device, which were funded primarily by the U.S. Army, however were also supported by a number of venture funds. Ayaz goes on to express that approximately six million dollars (10 million, 500 thousand TL) was spent on the research, development and productization stages for the device which in itself was the result of five-years of effort.

The device was first used following an explosion in Fellujah, Iraq to check U.S. soldiers and Iraqi civilians for cerebral bleeding.

INSTANT DETECTION
Referred to as the 'golden hour', medical intervention in the 60 minutes following a patient suffering brain trauma is crucial in significantly decreasing the likelihood of death or permanent injury.

The capability to detect whether a patient suffers from bleeding in the brain at the actual site of the accident and not necessitating transporting them to the hospital will open a new era for emergency situation medical care.
The Drexel University Optical Brain Imaging Center was established under the lead of Prof. Banu Onaral and is run by Turkish scientists. The center has fast become a U.S. meeting point for all Turkish scientists that want to study the brain. The laboratory, which is considered to be one of the United States' most respected science and technology development centers, admits a significant number of master and doctorate students from Turkey every year.

ACTRESS COULD HAVE BEEN SAVED
In 2009, actress Natasha Richardson was in a skiing accident in Canada, following which no cerebral bleeding was initially detected. Richardson went on to rest and instead went into a coma. She passed away at the age of 45 on March 18th, 2009 at the hospital where she was being kept on life support. According to the Turkish scientists, had the Infrascanner device been present at the ski center, the presence of bleeding in the brain would have been detected and Richardson's life saved.

HOW DOES THE DEVICE WORK
The Infrascanner device uses infrared light to instantaneously determine whether there is bleeding present in the brain. The apparatus' functioning principle is based on determining whether there is a differentiation in the absorption of infrared light on the potentially bleeding area of the brain and the healthy area.
Clinical trial studies held on 431 patients from a number of different centers resulted in detecting, along with tomography scanning, that 96 patients were suffering from cerebral bleeding of various sizes and depths.

The product has already received authorization for mass production by the United States.