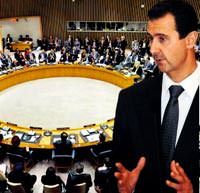 Turkey is getting ready to seek out legitimacy for international intervention, should the U.N. Security Council not reach a ruling, in an alternative arena in order to halt the bloodshed in Syria. The first step towards forming the ‘Friends of Syria’ Group will be taken at the February 13th meeting of the Arab League.


Under Prime Minister Tayyip Erdoğan's directive, any moves towards putting an end to the international community remaining spectators to Syrian State Leader Bashar Assad's bloody campaign against his own public, has been put on hold to await Russia's U.N. stance this week.

Should Russia's veto position hold strong, and the U.N. remain unable to act against the Syrian regime, then the button will be pushed on a three-stage plan that will involve an alternative method of gathering together the international community to reach a solution to the situation in Syria.

The three main stages of the plan Foreign Affairs Minister Ahmet Davutoğlu has referred to as the "new roadmap" is as follows:

1- First and foremost all efforts will be made to secure a U.N. ruling. For this purpose, Prime Minister Erdoğan called Russian State Leader Medvedev to deliver the message, "Assad stalled us, and he stalled the Arab League. This time don't let him gain more time by stalling you as well." Should Russia maintain their current stance against U.N. intervention then the legitimacy to establish the infrastructure for a potential operation in Syria will be sought from an alternative arena.

2- Should a U.N. ruling not be reached or should it not be enough to stop Assad then the international community will come together in order to intervene and establish sanctions just like what happened in 1999 against Kosovo and in 2003 against Iraq. The initial stages will involve isolating Assad by withdrawing international diplomats and closing all political doors.

Davutoğlu held a series of meetings in Munich for this very purpose. In addition to obtaining Germany's support, Davutoğlu also spoke with his counterparts in Iran, Qatar and Italy. While Turkey is preparing to host the meeting of the 'East' and the 'West', the first step to establish the Syrian Friends Group will be taken at the February 13th Arab League meeting.

3- The first objective of the 'Friends of Syria' Group, which will consist of the Arab League, the African Union, the EU and the United States, will be to stop Assad and to help the Syrian public by setting up a buffer zone in order to open a border crossing to provide food and humanitarian aid and later, if necessary, to save civilian lives.

Minister Davutoğlu explains that they are currently assessing every scenario when it comes to humanitarian aid and stated, "Our doors are open for those who are running, however the continuation of this oppression is unacceptable."

Davutoğlu also stated that when it comes to issues of humanity, then international norms do come into play. Davutoğlu pointed out that they have received message that people in Homs don't even have bread to eat, that the economy has come to a halt and that there are no longer any social activities and that this is a sign that the situation there is heading towards an intolerable point.