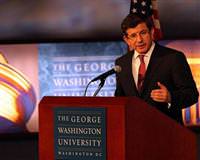 In a comment on the Syria issue, Foreign Affairs Minister Davutoğlu stated, “Even if everyone else remains spectators, we cannot remain a spectator to a massacre in our region.”

During his stay in the United States, Foreign Affairs Minister Ahmet Davutoğlu addressed students at George Washington University. Explaining that they are currently in consultations in order to establish an international platform to reach a solution to the Syria issue, Davutoğlu stated "If the United Nations is unable to act on the matter, then this would be an international platform that would support the Syrian public and act in solidarity against this bloody massacre… This is the spirit of this platform. As for what it entails and how it will be structured, this will be determined after deliberations."
Davutoğlu emphasized that they will not allow for the Syrian public to continue dying each day nor for the international community to remain spectators and referred to the pain still felt from the insufficient reaction by the international community to the three years of attacks on Sarajevo by Milosevic's forces in the 1990's.
"This is an ethical and conscience responsibility," states Davutoğlu, who went on to reference the developments in Homs in saying, "This city is falling apart as each day passes, just like what happened in Sarajevo. Remaining silent, Russia and China issued a veto, are we supposed to say we have done all that we can, let's just sit around and wait? No, never. As Turkey, even if everyone keeps silent and remains spectators, we cannot remain spectators to a massacre in our region. This is what we are doing now. We are trying to create a new international awareness."
In response to a question regarding the establishing of an alternative international platform, Davutoğlu said that they would not be reaching any conclusions on the name or what actions would be taken as of yet. "It could be called the Friends of Syria group or it could be named something else. These decisions will be made following deliberations. What matters is that we do not veer our sights from the developments in Syria and that we continue to exert pressure on the Assad regime with international solidarity with the Syrian public.
He chose to become Milosevic…
Davutoğlu also mentioned that the effects of the Cold War need to be erased from the region and said, "Last year, we wanted Assad to become Syria's Gorbachev; however he chose to become Syria's Milosevic." Davutoğlu also referred to the fact that in Egypt Mubarak was in power during the era when Egyptian youth used typewriters and he remained in power up until they began using Facebook and said, "This goes against the nature of history. Because they have had no other experience, to them it seems like the sustainability of a dictatorship is natural and how it needs to be. This is an illusion.
Telephone diplomacy continues…
Foreign Affairs Minister Ahmet Davutoğlu continued to conduct diplomacy on the Syria issue via the telephone from the U.S. capital. According to the information obtained, during Davutoğlu's series of meetings in Washington, he also spoke with High Representative of the European Union for Foreign Affairs and Security Policy Catherine Ashton over the phone. The conversation, which was requested by Ashton, dealt with the developments in Syria. It has also been learned that Ashton invited Davutoğlu to the next EU Foreign Affairs Council.
Davutoğlu also spoke with Indonesian Foreign Affairs Minister Marty Natalegawa today to discuss the Syria issue. During the conversation they discussed the current situation in Syria and the developments to follow the U.N. Security Council vote.