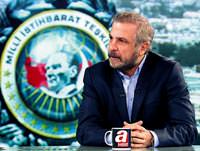 Speaking on a Haber, security specialist Mete Yarar says, "If the National Intelligence Organization (MİT), the Turkish Armed Forces (TSK) and the police were to interfere in one another’s operations then nothing would ever get done.”

Retired Turkish Armed Forces officer and security specialist Mete Yarar offered his views on a Haber regarding the Istanbul Special Authority Public Prosecutor calling in the MİT Undersecretary Hakan Fidan for questioning.
Yarar commented that to assess the work the MİT does with police discourse is a mistake. "What the police do is separate and what the Armed Forces do is also separate. The National Intelligence Organization's work is also something separate. When these establishments attempt to interfere in one another's operations without knowing what the actual task is or its intentions, then nothing ever gets done."
Yarar explained that while the American army was fighting Al Qaeda, CIA officials also met with the Al Qaeda terrorist group and stated, "During this process, no one from the Iraqi or American army ever said to CIA officials that they were stabbing them in the back."
THE OSLO OBJECTIVE
Yarar went on to state, "Wasn't the purpose of the meetings in Oslo to ensure that the PKK drop their weapons? So while there are intentions to establish this sort of weapon relinquishing environment, you go and say that the MİT is acting as an informant for the PKK? This makes me laugh. If I wanted to strengthen the PKK, why would I create an environment allowing them to cease their arms?"