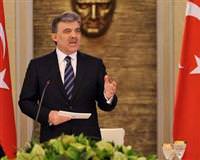 President Abdullah Gül met with the nation’s 81 governors at a Governor’s Meeting held in Ankara.

The lunch, held at the Çankaya Palace, was also attended by Minister of Interior Affairs İdris Naim Şahin and the Gendarmerie General Commander Bekir Kalyoncu.
During an address made at the luncheon, President Gül underlined the very important responsibilities that befall the nation's governors especially in the area of education.
Gül expressed his request for governors to show a close interest in their province's teachers and to make sure to stand up for all citizens without any discrimination based on religion, language and culture.
Emphasizing that everyone who lives within the boundaries of the Turkish Republic are true citizens, Gül stated, "There are some provinces where different languages are spoken and there are various religious beliefs. This is all a part of Turkey's reality.
We all have a great responsibility to embrace all of these diversities and to ensure that no one needs to feel that they are marginalized."
Gül also emphasized the positive performance of the economy throughout the nation and stated, "Everyone needs to fill their province's pitcher, while the water is flowing. Solve your important issues and infrastructure problems and protect your region's most significant architecture."