Davutoğlu and Clinton discuss solutions and delivering aid for Syria 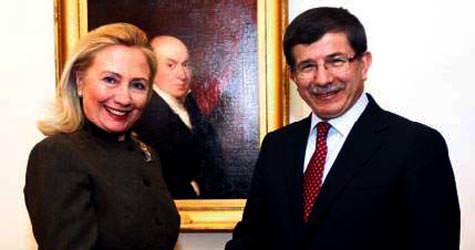 Foreign Affairs Minister Davutoğlu and U.S. Secretary of State Clinton met yesterday to discuss regional issues, primarily finding a solution to halt Syria’s violent crackdown on protests and ways to deliver aid to those affected by the conflict.

U.S. Secretary of State Hillary Clinton and Turkish Minister of Foreign Affairs Ahmet Davutoğlu enjoyed a working lunch yesterday, then went on to hold a bipartite meeting, followed by a joint press conference in which Clinton expressed that the two had reached a consensus on delivering aid to Syria and that they would be taking an a joint role in seeking a solution to the situation. The two agreed to discuss further steps at the inaugural meeting of a new "Friends of Syria" contact group in Tunisia on February 24.


Clinton said the United States would work to tighten international sanctions on the government of Syrian President Bashar al-Assad and seek ways to deliver humanitarian aid amid what she said was a "deplorable" escalation of violence by government forces.

"We have heard the call of the Syrian people for help and we are committed to working to allow the entry of medical supplies, of emergency help to reach those who are wounded and dying," Clinton said.

Clinton also stated that the United States backs the Arab League's latest plan for Syria, but sees challenges in winning U.N. approval for peacekeepers to halt the Syrian government's violent crackdown on protests

The Arab League on Sunday threw its support behind Syria's opposition and called for a joint U.N.-Arab peacekeeping force to quell the violence, boosting pressure on Russia and China which on February 4 vetoed U.N. Security Council action on the crisis.

But she suggested that the Arab peacekeeper proposal would be tough to get through given Russian and Chinese support for Damascus.

"There are a lot of challenges to be discussed as to how to put into effect all of their recommendations and certainly the peacekeeping request is one that will take agreement and consensus," Clinton said.

"We don't know that it is going to be possible to persuade Syria. They have already, as of today, rejected that."

Davutoğlu, whose country has been at the forefront of those calling for action against the Assad government, said the international community needed to look at all options as the crisis unfolds.

"We cannot be silent when these humanitarian tragedies continue," Davutoğlu said.

"At this moment we are talking on diplomatic and humanitarian steps to be taken. But for other scenarios, we hope that those things will not be needed but we need to think about contingencies as well," Davutoğlu said following his meeting with Clinton on Monday.