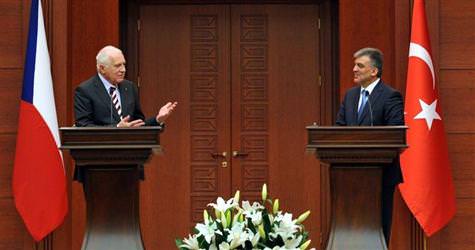 President Abdullah Gül announced that he is against an intervention in Syria being staged by the Western world.

Reminding that Turkey is working closely with the Arab League and neighboring nations in order to find a solution to end the chaos in Syria, Gül stated, "Our view is that intervention based from further abroad could be ill-advised."

Gül was speaking at a joint press conference held with Czech Republic President Vaclav Klaus at the Çankaya Palace, when he addressed Syrian State Leader Bashar Assad by stating, "The best thing he could for his own public is to find a way out without allowing for increasing chaos." Calling on Assad once again to step down, Gül expressed that change was inevitable in Syria and that they may have entered a path from which there is no turning back. "During this period of transition, it is necessary to hold free elections as soon as possible in order to prevent the public from further animosity amongst themselves," Gül states.

President Gül also delivered a clear assessment in regards to the current standing of relations with the European Union. "Turkey is ready for negotiations; however unfortunately, as a result of a few certain internal policy interests, this process has reached a dead lock." Gül went on to state, "This is because Turkeys' membership is a strategic issue."

Klaus reminded that they have always supported Turkey's EU membership and expressed the following: "Europe needs to wake up and be shaken up. It is from this rattling that Turkey's membership will fruition. Turks are extremely patient. I would not have been so."

Klaus attended the Turkish-Czech Republic Business Forum held by Turkey's Union of Chamber and Commodity Exchanges (TOBB) and in the evening, President Gül held a dinner in his owner at the Çankaya Palace. During the dinner, the visiting president stated "The Czech Republic hopes for your EU membership to be realized for its own benefit."