‘A strong message will be delivered from Tunisia’ 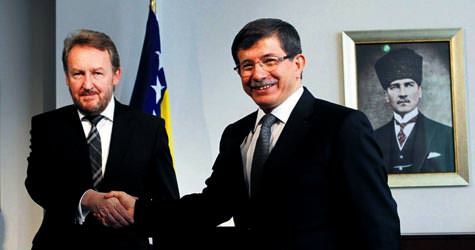 Foreign Affairs Minister Ahmet Davutoğlu explains that he expects a very strong message to come out of the February 24th meeting in Tunisia to be delivered to the Damascus administration.

Minister Davutoğlu made the announcement following a meeting held with Bakir Izetbegović the Bosniak member of the Presidency of Bosnia and Herzegovina. Stating that although the Syria draft to be presented to the UN General Assembly by Saudi Arabia in support of a UN-based regime change in Syria is not binding, it is crucial to not overlook the psychological effects that would be derived from the pressure exerted on Bashar al-Assad.

Davutoğlu expressed his expectations that a strong message will be delivered to the Damascus administration following the Syria meeting to be held in Tunisia on February 24th by stating, "This message will be one of solidarity with the Syrian public and will also act as a warning to the Syrian regime. The UN needs to not only tackle the political issue in Syria but must also step in to provide humanitarian aid."

Davutoğlu went on to explain that the issue of providing humanitarian aid will remain on the UN agenda and that they have already taken the necessary initiatives with the UN's Geneva office, and they will be closely following the issue.

Bakir Izetbegović the Bosniak member of the Presidency of Bosnia and Herzegovina emphasized that they consider Turkey to be a friendly and brotherly nation and stated, "In addition to this, Turkey's leaders are friends of mine that I have personal respect for."

Izetbegović also mentioned his plans to head to Istanbul following Ankara in order to pay a visit to Prime Minister Recep Tayyip Erdoğan. "I want to offer him my wishes that he get well soon. Because, Recep Tayyip Erdoğan does not belong solely to the Turks, he is a valued treasure for all of us. There are probably over one billion people, of whom Bosnia-Herzegovinians make up just two million, which are praying for Tayyip Erdoğan," states Izetbegović.