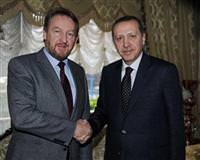 The first photograph distributed by the press of Erdoğan following his second surgery, depicts him in good condition. EU Minister and Chief Negotiator Egemen Bağış was also present at the meeting.


During an address following the member of council appointment, Bakir Izetbegovic had expressed that his father loved Prime Minister Erdoğan as if he was 'his own son'. "As my father lay on his deathbed, he said that he believed that Erdoğan, who he loved as a son, would be successful and that because he trusted him, he was in a sense entrusting the perpetuation of the existence of Bosnia-Herzegovina to Erdoğan."

Bağış used social media to share with the public that Erdoğan was in good health and wrote "Thank goodness, we saw that after undergoing surgery, Prime Minister Erdoğan is resting in his home and looks very good and healthy."

Members from the Municipality and Special Authority Employees Union (BEM-BİR-SEN) gathered in front of Erdoğan's residence in order to offer their wishes for his speedy recovery. Speaking on behalf of the group, Niyazi Karakoç stated, "We wanted to visit our Prime Minister, who put his own health aside in order to serve the nation, and offer him morale."

The Kasımpaşaspor football club displayed a sign wishing the Prime Minister 'get well soon'. Meanwhile, Minister of Health Recep Akdağ also commented on Erdoğan's condition, stating, "He is resting at home, we will begin working together soon."