Bartholomew: “We are happy as minorities in this new Turkey” 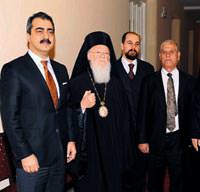 Ecumenical Fener Greek Orthodox Patriarch Bartholomew referred to the Treaty of Lausanne in his request that there be absolutely no discrimination and that all minorities be recognized as Turkish citizens in the new constitution.

Ecumenical Fener Greek Orthodox Patriarch Bartholomew met with the Parliament's Constitutional Reconciliation Commission in order to share his views on the drafting of a new constitution. Bartholomew described the meeting as, "The first time minorities have received an official invitation in the history of the Turkish Republic.

"We do not want to be second class citizens. We do not want discrimination, we want equality. Slowly but surely this is all changing and a new Turkey is being born," Bartholomew stated. The Fener Greek Orthodox Patriarch provided an 18-page Constitutional report in which he listed a series of requests involving the new constitution and including the opening of a seminary.

The requests include:
The Constitution include a reference to the Lausanne Agreement.
A statute be added that would allow for minorities to be able to work in public service positions and to be able to accelerate in bureaucratic careers.
For minority schools, and religious leaders and places of worship to be allocated support from the state budget.
For all legal recognition and obstacles regarding property rights to be lifted.
For a clause on hate crimes to be added to the Constitution.


For the description of being a citizen to be: "Everyone who is connected to the Turkish Republic through citizenship regardless of religion, sect or ethnic roots is a Turk. Turkish citizenship is an expression of the existence of unity and solidarity."