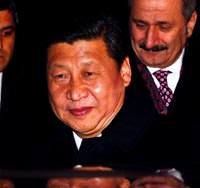 China’s leader-in waiting Xi Jinping will be hosted by President Gül under ‘Type A’ protocol status during his three-day visit to Ankara, the last stop on a trip that has taken him to the United States and Ireland.

President Abdullah Gül will be hosting China's Vice President Xi Jinping at the highest protocol level, usually applied during presidential level trips. This gesture will include a military greeting upon his arrival to the Presidential Palace, with the firing of a 21 gun salute. In addition, both the Turkish and Chinese national anthems will be played in honor of Jinping's arrival.

Under normal circumstances, and 'Type C' protocol, when vice-presidents visit the palace, they are greeted by a military squad while President Gül waits at the door. Although Xi Jinping's current position warrants the 'Type C' protocol, this time, things are being done a little different as it is deemed certain that at the close of the year; Xi Jinping will have taken on the Chinese presidency. As a result, Xi Jinping is being treated at the state leader level for this trip in which he will meet with President Gül in addition to a number of high-level Turkish leaders. Meetings will be held to discuss joint, regional and international topics in which they will share views and discuss opportunities. During his stay, Xi Jinping will attend the Turkish-Chinese Economic and Trade Forum. This evening, Jinping will meet with Prime Minister Erdogan in Istanbul.

28 AGREEMENTS TO BE SIGNED

China's Vice-President will be accompanied by CEO's from 58 high-level firms. These Chinese firm administrators will be meeting with a series of high-level administrators from Turkish firms at tomorrow's Turkish-China Business Forum held at the Istanbul Hilton Convention Center. Approximately 28 agreements are anticipated to be signed at the meeting.

Chinese Vice-President Xi Jinping arrived to Ankara last night at 19:30 on a double-story Jumbo Jet referred to as the 'Queen of the Sky'. Jinping was greeted at the Esenboğa Airport by Economy Minister Zafer Çağlayan. Upon his arrival to Ankara, which was minus 18 degrees at the time, Jinping's first question was, "Is it snowing?" When he descended the aircraft, a number of Chinese students studying in Turkey waved Turkish and Chinese flags to welcome Jinping with a demonstration of love.