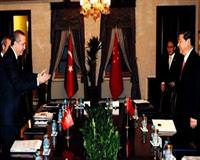 Prime Minister Erdoğan hosted Chinese Vice-President Jinping in his Istanbul Prime Ministry office in Dolmabahçe where they reached a consensus on signing an agreement on the peaceful uses of nuclear power.

Yesterday's meeting marked the first time Prime Minister Recep Tayyip Erdoğan visited his office in Dolmabahçe Palace after having undergone a minor operation just 11 days ago. The People's Republic of China's Vice-President Xi Jinping arrived to Istanbul to meet with Premier Erdoğan yesterday after completing a series of meetings in the capital. Erdoğan and Jinping met one on one first and then later moved on to a meeting with joint committees.

CHINA HAS NUCLEAR ASPIRATIONS IN TURKEY

A consensus was reached during both the one on one and mutual committee meetings held yesterday that prior to engaging in negotiations for China's prospective interest in building a 20 billion dollar nuclear power station in Turkey, an 'Agreement on the Peaceful Use of Nuclear Power' should be signed between the two nations, the draft for which was also discussed yesterday. During yesterday's meetings, it was also decided that the agreement will be signed in April when Erdoğan is scheduled to pay an official trip to China. Turkey, which is in preparations to build a nuclear power station, is signing agreements on the peaceful use of nuclear power with a variety of nations they are conducting nuclear deliberations with and have already signed such treaties with the United States and Russia as well as with a number of neighboring nations. Once the agreement is signed between China and Turkey nuclear negotiations are expected to begin between the two nations.