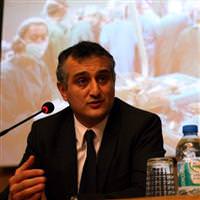 WE WILL NEED A POSITIVE BLOOD

During a press conference, Tuncer appealed for A positive blood donations to overcome possible complications and explained that this was Turkey's second and the world's 28th face transplant operation, however it was the world's first ever quadruple limb transplant. "There were 54 doctors attending the surgeries and 128 assistant medical personnel that were on duty for 20 hours. This type of operation involves the transplant of tissue, which is much more involved than a routine operation. Due to the need for blood, we have researched to see if the new tissue will be accepted and whether the blood will be able to be pumped properly. The upcoming few days will be critical," Tuncer explains.

"What matters more so than news of the organ transplants being echoed throughout the world is the health of our patients. Their psychosocial health is also important for us. We are also expecting the press to display the highest level of respect for our patients. Our patients will be receiving psychosocial support. If they want to be involved with the press they can be, however we are requesting the press to not exert any pressure on the matter. There were 52 individuals watching over our patients at the same time in the operating rooms last night. Hopefully, God will grant them their health. We must pray. I also want to thank the Ministry of Health."