Sarkozy's policies are contrary to French law and culture 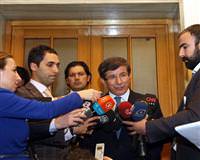 Davutoğlu stated that Nicolas Sarkozy pushed his luck by attempting to pass a law which would criminalize the denial of Armenian claims.

Foreign Affairs Minister Ahmet Davutoğlu was responding to questions on the state-run TRT News television station, when he stated that following the approval of the law in the French Parliament and the Senate, Turkey was set to release a second phase of sanctions, however instead chose to conduct silent diplomacy during this process.

When Davutoğlu was reminded of news which has surfaced in the press of French President Nicolas Sarkozy's intentions to alter the law in order to resend it to a parliamentary vote, Turkey's Foreign Affairs Minister said that it would be extremely unfortunate for a French politician to attempt to challenge a ruling made by the nation's highest level court.

Davutoğlu states, "Sarkozy already tried to push his luck. If he attempts to do so again, then it will be equivalent to staging war against French culture, French law and France's constitutional state."

A ruling to set a precedent

Responding to questions from the press at Turkey's Grand National Assembly, Foreign Affairs Minister Ahmet Davutoğlu stated that the French Constitutional Council ruling provides a significant contribution to French law and went on to state the following; "More precisely, the ruling has eradicated the negative image that could have surfaced in France. This is also a significant step in terms of legal principles and the politicization of history. We hope that from here on out, those who attempt to conduct politics in any manner based on a society's history or for this or that reason will have learned a legal lesson. This is extremely important."

Hopefully they will not make a grave mistake…

When one journalist brought up that Nicolas Sarkozy had stated that should the law be overturned by the Constitutional Council, he planned to draft a new law, Davutoğlu commented; "Hopefully they will not make such a grave mistake."

When asked whether or not the first stage of sanctions Turkey issued against France would be brought to a halt, the Foreign Minister responded by stating, "The ruling has just been released. Of course, we will be evaluating the situation with our President and Prime Minister and the Council of Ministers. However, at this stage, I can say that the negative atmosphere that could have surfaced between Turkish and French rights has been lifted. "

Arınç: The ruling has prevented a potential crisis

"The French Constitutional Council has provided a lesson on law to the French politicians who signed on to this bizarre law. We knew that this law, which was passed entirely by the parliament as a result of cheap political apprehensions, would collide with France's common sense. We staged a calm and decisive diplomatic struggle against a group of boisterous French politicians. The Constitutional Council made the right decision. This decision has prevented what could have been a potential significant crisis between Turkey and France. I hope that this ruling will be a lesson for all future unlawful endeavors."

Bağış: Intelligence has risen above absurdity

EU Minister and Chief Negotiator Egemen Bağış expressed that France has narrowly escaped what would have been a historical mistake and stated, "Intelligence has risen over absurdity."
Bağış goes on to state, "This isn't an event we need to celebrate in a big way; however it does need to be celebrated by France. That is because it would not have been feasible for France to carry this kind of shame. I would like to recommend that French politicians stop worrying about the past and begin dealing with the future."