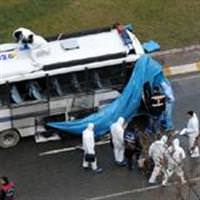 A remote control bomb injured 15 police officers and one civilian on Thursday as a police minibus passed close to the Istanbul AK Party headquarters.

"As a police vehicle carrying 21 officers was passing by, a remote control bomb on a motorcycle exploded. Our teams are carrying out the investigation," Istanbul police chief Huseyin Capkin told reporters.

"I strongly condemn the terrorist attack in Istanbul's Sutluce district. Sadly, 15 police officers and one civilian were injured as a result," Prime Minister Tayyip Erdogan told a news conference in Ankara.

"Our struggle against terrorism will continue with the utmost determination," he said.

The bomb exploded on a road junction next to a building site in the Sutluce district of Istanbul, a poor, but developing neighborhood on the banks of the Golden Horn.

"It happened around 9 am.. I was in my shop, and when I heard the explosion I ran out," said Orhan, a local shopkeeper. "People ran to the minibus. There were no flames. The injured were moved to a building nearby and later into the ambulances."

Security guards from nearby offices and passers-by helped moved the wounded to the Independent Industrialists and Businessmen's Association (MUSIAD) building next door to the AK Party building.

Fire engines and police vehicles surrounded the area and glass littered the streets as forensic officers in white overalls combed the area for evidence.

"Investigations into the type of bomb and the organization (behind it) are continuing," media quoted Interior Minister Idris Naim Sahin as saying.