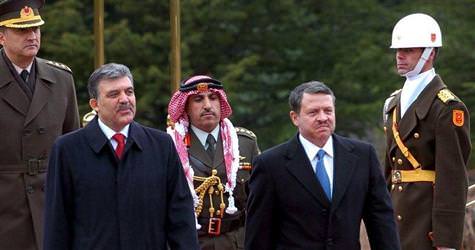 King of Jordan Abdullah II states that Turkey had already raised its profile in the region, long before the Arab Spring, with its “positive stands and timely policies”.

Abdullah II of Jordan, who gave an exclusive interview to the Turkish Policy Quarterly, stated that, "the Arab Spring was a much-awaited opportunity to overcome internal resistance to change and embark on an unprecedented political reform process. The Arab Spring is a call for dignity, justice, and freedom. It is a call for change directed to all forces in the old regimes, whether in government or at the opposition."

While discussing the developments in Syria, King Abdullah II expressed that both neighbors Turkey and Jordan now have 'new burdens and responsibilities' and went on to state that "Turkey has always been a key regional player, and started raising its regional profile well before the Arab Spring, thanks to positive stands and timely policies."

Responding to a question on whether or not the deterioration of Turkey-Israel relations will affect the likelihood for a peaceful resolution of the Israeli-Palestinian issue, King Abdullah II stated the following:

"A few years back, President Clinton told me that the Israelis will only negotiate from a position of strength. And a position of strength is not where they are today, reportedly breaking ranks with the U.S. on Iran, having damaged their relations with Turkey, and facing growing popular resentment and increasing isolation from their Arab neighbors, including the very moderate ones."