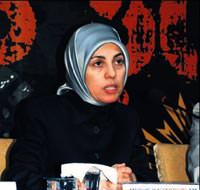 Ankara’s Special Authority Prosecution Office has called in Virtue Party (FP) Istanbul Deputy Merve Kavakçı, who was dropped from parliament and stripped of her citizenship, as a complainant in connection to the investigation into the February 28th postmodern coup.

Kavakçı, a significant figure from the February 28th era, is being called in as a complainant for harm that she incurred for wearing a headscarf in the Assembly due to the policies in place at the time. According to information obtained, in the upcoming days Kavakçı will be providing her statement to Prosecutor Mustafa Bilgili.

When Merve Kavakçı was elected as Istanbul deputy in the 1999 elections she arrived to the oath-taking ceremony at Turkey's Grand National Assembly wearing a headscarf and due to objections by Bülent Ecevit, the Prime Minister at the time and a number of Democratic Left Party (DSP) deputies, the party with the parliamentary majority, she was not allowed to take the oath. She was dropped from parliament, banned from practicing politics and later stripped of her citizenship.

Efforts to reestablish Kavakçı's rights as a former deputy have already begun in parliament.