We will not have relations during the Greek Cypriot EU Term Presidency: FM Davutoğlu 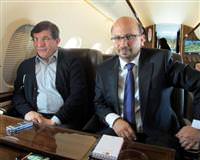 Davutoğlu answered a series of question posed by journalists prior to his trip to Holland.

What will happen in Cyprus in July?

Turkey's Cyprus policy is tied to certain principles and methods. Our principle is that Cypriot Turks be given their basic rights and for Turkey's national interests in the Eastern Mediterranean be protected.

Has a road map been determined for the upcoming period?

The UN Secretary General has decided to exert new efforts to ensure the continuation of negotiations. We want an international meeting to be held in the Bürgenstock style. This is what we are requesting, however it is an issue the Greeks are avoiding. Our priority is to focus in on these meetings.
What are the alternatives with Cyprus?

1- To continue the status quo. The Greek Administration attempts to perpetuate its presence as a state with the continuation of the status quo. However this results in a number of fragile outcomes for NATO and EU relations, to the stability in the East Mediterranean. This is a status quo that could at any moment create a crisis. The tension that surfaced from the Greek Cypriots' recent natural gas endeavors is evident.

2- For a comprehensive solution that is accepted by all to be reached by July 1st.
This is not difficult. The framework for these debated issues has been known for 35 years. We feel that what is necessary is that by gaining momentum and intensifying negotiations, an international conference is held, after which a referendum should take place. This is our strategy.

3- If no solution is reached then a report will be written by the UN Secretary General. It is important that report is positive.

If there is no solution...

If no solution is reached and on July 1st Cypriot Greeks take on the EU Term Presidency, then we have made what our stance will be very clear. No one should expect us to display any other stance. There is a new window of opportunity now. The EU needs to turn to the Greek administration and say if you can solve this issue in any way, then do so. We accepted your membership as a country whose border issues have not been solved; however we cannot accept you as a term president."
When July 1st comes, we will not have any contact with the EU Term Presidency.

Is July 1st a definitive date?

July 1st is a criteria based on not seeing the Southern Cypriot Greek Administration as EU Term President.

There is the issue of two chapters (23 and 24) planned to be opened during the Greek Cypriots' Term Presidency...

Because we will not be part of any joint council with Greek Cypriots during their term, if it weren't just two but 20 chapters being opened during the Greek Cypriot Term Presidency we would still not sit at the table with them.