West and Iran to seek solution in Istanbul 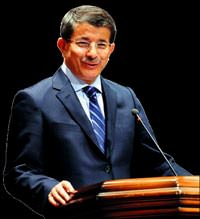 Foreign Affairs Minister Davutoğlu has announced that Iran and Western nations will be meeting at a summit in Istanbul, which may be held at the start of April.

Foreign Affairs Minister Ahmet Davutoğlu answered a series of questions on issues surrounding the upcoming summit on Iran, the situation in Syria and Israel during his return flight from the Turkey-Iran-Azerbaijan tripartite summit held in Nakchevan.

When will negotiations begin between Iran and P5+1?

Iran says, 'Let's begin negotiations.' However an election was recently held in Iran and now there is the long Nevruz break. It should be possible to start negotiations in the start of April.

What sort of preparations are being made to ensure results are achieved in negotiations? Allegedly, Turkey's risky Tehran Agreement has actually bought Iran some time…

Over the past month, I met with foreign affairs ministers from five different countries. The majority feel that the Tehran Agreement was a missed opportunity. If that agreement had been applied, then we would have had 1,800 kilograms of Iran's 3,000 kilograms of low enriched uranium. If Iran had been given the 120 kilograms of 20 percent enriched uranium they needed, then they would not have continued their enrichment efforts. Also, if Iran had continued their enrichment program after receiving what they said they required, then any bad intentions would have become evident. Now Iran says, 'In order to use the Tehran Research Reactor, I need medium-level enriched uranium. You are not giving it to me and you are restricting me from producing it. In that case, I will go ahead and do it myself.' At present, Iran has 120 kilograms of medium grade enriched uranium. If our plan had been applied then this would not have been necessary. It would have taken more time for Iran to reach the capacity they are at today, and it would have also provided the opportunity to establish an environment of trust for dialogue. The objective now is for Iran to offer certain guarantees that they will stop at 20 percent enriched uranium production.

The West feels that 'Iran could at any moment say they have made a nuclear weapon.' Iran on the other hand says, 'I am not producing weapons'. In fact Khamenei even issued a fatwa stating nuclear weapons are 'forbidden'. It is somewhat insulting to repeatedly tell Iranians not to produce weapons, especially after the Ayatollah has already issued a fatwa against it.

Sanctions on Iran are being presented as diplomatic options, however Turkey seems to feel it will not reap results…

Iran is making a choice between the harm they will incur from sanctions and what they will gain from having nuclear energy. Because they see this as a national issue, sanctions lose their effectiveness. We need to keep this issue on a technical level and not let it turn into a national issue.

There is the expectation that Turkey will limit petroleum imports from Iran. What will be your stance?

Our stance will be defined by the UN ruling.

Iran believes that there is still a chance for Syria under Assad's supervision. However, we feel that the Arab League plan needs to be put into effect and Assad needs to hand over his authority. They ask 'what is the alternative'; however at this stage Russia and Iran have begun to feel apprehensive of the post-Assad era.

Is it possible to open a humanitarian aid corridor for Syria?

In order to establish a humanitarian aid corridor, there needs to be a UN Security Council ruling. We need to work on this; however efforts are in place to provide humanitarian aid. UN Special Representative Kofi Annan will be coming to Ankara after his trip to Damascus; we will evaluate the options then.

Israeli and U.S. preferences are different

What do you think about Israel's President Netanyahu's meetings held in the United States?

Recently, the angle has widened between the United States' strategic preferences and Israel's tactical choices. Washington believes in multi-faceted diplomacy, whereas Tel Aviv has an administration that remains distant from diplomacy, and international mechanisms.
For example, Obama's first item of business was to deal with the Palestine issue, whereas in the past, U.S. presidents would have dealt with this issue later. Netanyahu however, has left every single move for peace half finished. They continued occupying and left the negotiation table with Palestine. In fact, it was different during Ehud Olmert's time. During that period, Washington had a president that conducted one-sided diplomacy. Tel Aviv, in other words Olmert, on the other hand, opened up to the international world.
This is a translation of an article originally written by Okan Müderrisoğlu.