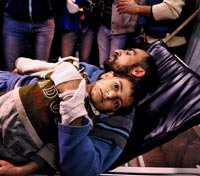 It’s the same scenario… Whether it truly is a response to ‘rocket fire’, the result is the same: Palestinian civilians are dying after four days of ongoing bombing in Gaza. Prime Minister Erdoğan’s famous outburst in Davos has found validation once again.

At a 2009 World Economic Forum held in Davos, Switzerland, Prime Minister Recep Tayyip Erdoğan addressed Israeli President Shimon Peres during a panel on Gaza and stated, "When it comes to killing, you know well how to kill. I am well aware how you hit and killed those children on beaches." Despite the international pressure however, Israel insists on writing the same script.

NETANYAHU: WE MAY BROADEN OPERATION

Starting on Friday, for the past four days now the Israeli Army has staged almost 50 air strikes on the Gaza Strip, resulting in the deaths of 23 Palestinians, including two children. The operation, which began as Israel's response to rocket fire from the Palestinian Territory has resulted in the surfacing of heartbreaking images of dozens of injured children being carried to hospitals. Dozens of wounded children were taken to a hospital in Beith Lahia, their eyes filled with pain and fear. In Gaza's Jabalia refugee camp, injured Palestinians that were recovered from collapsed buildings filled the area hospitals. The most daunting announcement regarding the recent slew of airstrikes which has wounded over 100 came from Israeli Prime Minister Benjamin Netanyahu, who said that if rocket fire continues, Israel "is ready to expand its operations and continue them as necessary." The loss of civilian lives has resulted in refuting the Israel Military's claim they started the operation in response to 182 rockets fired on Israel by Palestinian armed forces. It has been made evident that the 'Iron Dome' missile defense system successfully prevented 130 rockets from firing. The Islamic Jihad Organization has since announced that they began setting off rockets in defense following Israel's attack.

Israel's recent attacks have received harsh criticism from the international community. While China called on Israel to halt the air raids, UN Secretary General Ban Ki-moon stated, "Killing civilians is unacceptable. Israel and Palestine should avoid provoking actions." Meanwhile, foreign affairs ministers from the Middle East Quartet (USA, UN, EU and Russia), which was meeting in New York to discuss the Middle East and Arab Spring, focused on the Israeli attack on Gaza and the issue of returning to negotiations.