Turkish journalists in the hands of Syrian intelligence 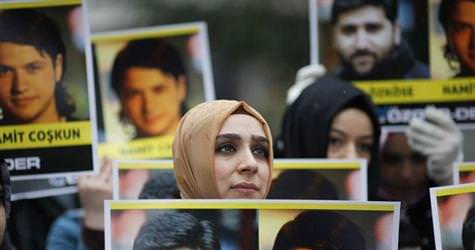 The two Turkish journalists which have been missing in Syria for a week have supposedly been handed over by regime-affiliated militia to members of Syria’s intelligence agency.

Two Turkish journalists,reporter Adem Özköse, who works for the Milat newspaper and Gerçek Hayat Magazine, and cameraman Hamit Coşkun, are missing in Syria a week after travelling to the city of Idlib where, activists said, dozens of people have been killed in a Syrian army bombardment and house-to-house searches.

According to eye-witnesses, members the Shabbiha militia have handed over the two journalists to intelligence officers in the el-Fua village located nearby the town of Binnish in Idlib. Witnesses state that the two Turkish journalists were taken out of the village in two armored vehicles belonging to the intelligence agency. Local sources claim cameraman Coşkun appeared wounded and speculate that the journalists may have been tortured.

WE ARE TRACKING THE TURKISH JOURNALISTS

Erdoğan has also made an announcement regarding the tracking of the two journalists. Erdoğan, "Our Foreign Affairs Ministry has made a variety of efforts to locate our two friends and we are closely tracking their whereabouts. We hear certain rumors and follow up on them. We are warning the international community, and primarily Iran, we would like them to treat this issue with sensitivity."

Meanwhile, Minister of Foreign Affairs Ahmet Davutoğlu called his Iranian counterpart Ali Akbar Salehi to request that Iran step in and draw attention to the humane aspect of the incident, reminding that these journalists were serving a universal duty. Davutoğlu also warned against the journalists being harmed in any way. Ankara has stepped in in the past in order to intervene in the abductions of Hadj pilgrims and engineers in Syria.

"We are making a great effort for the safe return of our journalists through every possible initiative," state-run Anatolia agency quoted Foreign Minister Ahmet Davutoğlu as saying in a report on its website. "There have been saddening deaths from the international media in Syria recently. It shows how severe the situation has become in Syria," he said.

The two arrived in Idlib province, just across the border from Turkey, a week ago, the newspaper and activists said. Turkey's Hatay province has become a staging post for reporters attempting to cross the porous border to cover the protests and fighting in nearby areas of Syria. But the work has become increasingly dangerous with two reporters, American veteran war correspondent Marie Colvin and
French photographer Remi Ochlik, killed in the fighting and at least one more wounded.
The Turkish Foreign Ministry has contacted Syrian authorities for information about the missing journalists, but had not received a response from officials in Damascus, while the Aleppo governor's office said it would look into the issue, a ministry official said.

Families and friends of Özköse and Coşkun gathered in front of the foreign minister's office in Ankara for information on the men, who have not been in contact for four days. The group then moved on to the Syrian embassy in the Turkish capital. "Journalists, aid volunteers or civilians cannot be harmed
anywhere in the world," said the group's Eyup Gokhan Ozekin. "We fear for the lives of our friends. We expect an explanation from Syrian officials."

Idlib has seen a marked rise in violence in recent weeks involving Syrian security forces and army defectors. Opposition activists said the army had killed dozens of people in Idlib on Tuesday, while rebels had killed 10 loyalist troops.

After long-courting Syrian President Bashar al-Assad, Turkey ditched its friendship last year following the violent government crackdown on protests and is now at the forefront of efforts to try to galvanise international action to try to stop the spiral into civil war. There are some 13,000 registered Syrian refugees living in camps inside Turkey along its border with Syria, and an estimated 2,000 more staying with Turkish relatives.