‘We are making modern and democratic reforms in our education system’ 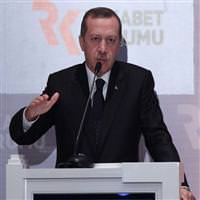 Prime Minister Erdoğan responded to criticism directed at the new 4+4+4 education system reform by stating, “This is not ideologically-based, this is a pedagogical reform. We are using democracy to get rid of procedures that were enforced with tanks.”

Prime Minister Erdoğan was attending a meeting in honor of the 15th Year Anniversary of the Founding of Turkish Competition Authority, where he also thanked those involved in preparing, presenting and analyzing the 2012 Competition Report.

Mentioning the recent changes in Turkey's national education system, Prime Minister Recep Tayyip Erdoğan stated, "Once again I repeat that the changes we are making to the educational system today are not ideological, they are pedagogical reforms. This new arrangement is one that corresponds to a modern growing Turkey's educational and economical needs. Those who are against the reforms are acting with the same mentality as those who brought on the continuous education regulation, and those who supported it.

Noting that as a country, as a nation, for nearly 200 years now, Turkey has experienced an extremely painful and controversial process of modernization and Westernization, Erdoğan stated, "We are an ancient and rooted nation derived from a great civilization. During periods of time when our nation began to regress economically, socially and politically in light of the changes in the world; our intellectuals, our politicians would bring one main question to the agenda. Will we imitate the changes in the world or will we successfully achieve change through our own internal dynamics and experiences?

How will we blend universal values with local ones, how will we secure what our nation's truth are and the world's truths at the same time? How will we create the correct line between closing in internally and opening up to the world?

Even today, we still experience serious discomforts on issues which are not congruent with our civilization's principles. Meanwhile, certain segments of society still show resistance when it comes to issues of freedom and basic rights such as human rights, which began with our very own civilization. Our 200 years of experience have taught us this: lasting and widespread change is possible when the community structure embraces it. It is possible to establish permanent change accepted by the community, in which external dynamics are met with internal dynamics. However, it is not possible to achieve success through imitating, copying or importing it. An imitator will always follow behind those they are copying, therefore the best an imitator can ever be will be a very good one. When we copy laws in their entirety and force them on society, we have been and are unable to achieve success. When we identically copy the modern world's foundations, lifestyle and systems in place and apply it onto our own society, we have not achieved success nor will we."