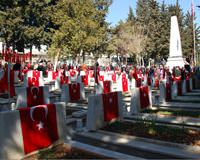 An official ceremony held yesterday in Çanakkale’s Republic Square to commemorate the Ottomans’ World War I victory over the Allied fleets, known as the Battle of Gallipoli, began with Deputy Prime Minister Bülent Arınç laying a wreath in front of the Atatürk Monument on behalf of the Turkish nation.

Çanakkale is a symbol of the independent Turkish nation…
Arınç began his address made at the March 18th Stadium in Çanakkale by offering his condolences to the relatives of the 12 Turkish soldiers serving for the ISAF who were killed in a helicopter crash in Afghanistan three days ago.

"When it comes to the integrity of the land and national independence, the Çanakkale Victory is the best proof of what a nation can do. Deprived of modern weapons of any kind, the people of Anatolia fought in unison against the best-equipped armies of the day to forge an unforgettable and glorious history. This victory also serves as a symbol and a source of inspiration for other nations waging a struggle for their independence and liberty.

Inspired by the Çanakkale Victory, our ancestors displayed another heroic struggle in the War of Independence in which they were surrounded on all sides by the enemy. This nation of ours which was handed down to us from our ancestors was founded on solid principles of unity and solidarity. No one should have any doubt that this spirit of unity and solidarity will be with us forever. Our crescent and star flag will forever wave on this sacred land that our ancestors gave their lives for.''

"The greatest lesson that the Çanakkale Victory has given us is that nothing is unattainable when there is unity, solidarity and fraternity. Those who visit our martyrs' burial site, those who have read what is written on their tombstones can easily comprehend how this nation joined together. Our greatest responsibility to our martyrs and veterans is to understand the spirit of Çanakkale which unifies us as a single nation with a joint destiny and shared ideals. As Turkey embraces a happier and brighter future, the nation's greatest security is in fact this sense of responsibility, sprit and consciousness."

Thousands flock to the Martyrs Memorial…

Thousands of youth flocked to the Gallipoli Peninsula from throughout Turkey and abroad to pay their respects and visit the Martyr's Memorial.