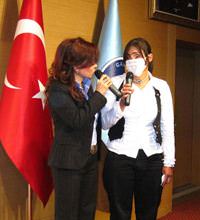 One of the world’s most fantastic face transplants was recently performed at Gazi University. The operation, which was first staged virtually and then held in the operating room, was a three-dimensional face transplant, which includes the transferring of bones, cartilage and teeth.

The three-dimensional transplant, which was recently conducted on a woman in Turkey, is considered to be the most challenging operating technique. Hatice Nergis' new face is expected to be the best example in the world of a face transplant thus far. The reason being that during the 11 hour operation; in addition to skin; bones, cartilage, the upper lip, in fact even skin on the inside of the mouth were all transplanted into the patient. Dr. Selahattin Özmen explains that they even transplanted six front teeth.

LESS RISK: For a transplant to be three-dimensional does not increase the risk of rejection. Cartilage, tissue, mucus and teeth do not carry separate risks for rejection. Transplanting the nose and chin bones along with the skin makes compatibility easier.

A VERY GOOD PATIENT CHOICE: The two other face transplants in Turkey were done on burn cases. In Hatice Nergis' case, she was shot in the face, which means there was no chance for her to heal.

STITCHES WILL BE HIDDEN ALONG SMILE LINE: Because this is a half face transplant, the patient's stitches will be done along the laugh line, which means that the scar will not be extremely visible.

SHE WILL LOOK IDENTICAL: The three-dimensional face transplant technique is considered to be the most challenging; however it also reaps the best results. Because the transplant includes half of the face as a whole, the bottom portion of the recipient's face will be identical to her donor's.

DOCTORS SHARE THE SAME TEACHER: All three doctors which have conducted the three face transplants which have taken place in Turkey were all trained in the same clinic. Dr. Ömer Özkan, Dr. Serdar Nafiz Nasır and most recently Dr. Selahattin Özmen were all students of face transplant expert Dr. Maria Siemionow at Cleveland University. Every year since 1995, Siemionow has had a Turkish doctor assistant. According to Siemionow, Turkish physicians are extremely hardworking and talented, which is why she supposedly prefers them.

Hatice Nergis was awoken by doctors yesterday morning and was then taken off respiratory support. Her doctors say she is recovering well, is writing down her needs and has even walked a bit today. Nergis will be accompanied by psychiatrists when she sees her new face for the first time, which will take place when she feels ready.