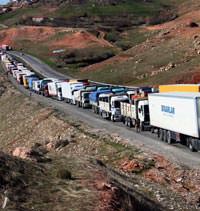 UN High Commission for Refugees Spokesman Metin Çorabatır states that Turkey is a country known for its generosity and for being the best in implementing their refugee principle and says, “Turkey is applying its ‘open door policy’ in the best way possible and is meticulously implementing its non extradition principle. The UN commends Turkey on this matter.”

Çorabatır also expressed that the UN praises Turkey's opening of their doors to Syrians fleeing their nation and said, "Ever since the initial arrivals from Syria began, the UN High Commission for Refugees as well as the UN's other sister institutions such as UNICEF announced that we are ready to provide every form of assistance to the Turkish government."

The Friends of Syria meeting scheduled for April 2nd in Istanbul has been brought forward a day. The invitations for the meeting have been sent out. Prime Minister Tayyip Erdoğan will be hosting the summit and Russia and China, which vetoed the UN's sanctions ruling against Syria, have been invited.

While the number of Syrian refugees in Turkey has escalated to 16,623, efforts have begun to set up an additional camp in Şanlıurfa's Ceylanpınar district. The infrastructure has been completed in a 100,000 square meter area along the borders of the Ceylanpınar Agricultural Enterprise Department. Tents provided by Turkey's Red Crescent are currently being erected with plans to have a total 4,000 tents set up in order to accommodate 20,000 people.

Due to the developments in Syria, Turkish lorry drivers have been heading for the Habur Border Gate, which has resulted in a 30 kilometer line of lorries attempting to cross through. With lorries completely occupying the Silk Road, vehicles are now being routed through a single lane between Cizre and Silopi.