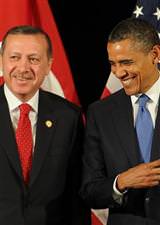 President Barack Obama says he and Turkey's prime minister are looking for ways to bring about needed change in Syria as that nation's leadership continues a bloody crackdown on civilians.


Obama met with Prime Minister Recep Tayyip Erdogan on Sunday ahead of a nuclear security conference in South Korea. Turkey shares a border with Syria and has been a key player in trying to stop violence that has claimed an estimated 8,000 lives over the past year.

Erdogan said, "We cannot remain a spectator to these developments."

Both leaders spoke at the end of their meeting.

Turkey is to host a meeting of the diplomatic group known as the "Friends of Syria" next week to show Syrian President Bashar Assad a united front against his repression.


PRESIDENT OBAMA: I just want to say how much I appreciate the opportunity to once again meet with my friend and colleague, Prime Minister Erdogan. I think it's fair to say that over the last several years, the relationship between Turkey and the United States has continued to grow across every dimension. And I find Prime Minister Erdogan to be an outstanding partner and an outstanding friend on a wide range of issues.

We devoted a lot of this meeting to the issue of Syria, where the United States and Turkey have worked with a broad-based coalition, an international coalition of countries in the region, as well as around the world, who deeply object to the killings that have been taking place in Syria and are absolutely committed to trying to help those innocent civilians who are being killed by the Assad regime. And we are very much in agreement that there should be a process whereby a transition to a representative and legitimate government in Syria takes place.

So I expressed my thanks for Turkey hosting the next "Friends of Syria" meeting. And we worked on a common agenda in terms of how we can support both humanitarian efforts, political efforts, the efforts of Kofi Annan to bring about much needed change inside of Syria. And not only Prime Minister Erdogan but his entire team has shown outstanding leadership on this critical issue.

We also had the opportunity to discuss the issue of Iran and its nuclear program. I expressed to the Prime Minister once again that I believe there is a window of time to resolve this question diplomatically, but that window is closing. And it's absolutely critical for us to be able to move forward in an effective way, in a serious way, in concert based on negotiations through the P5-plus-1 and other channels, to ensure that Iran abides by its international obligations, which also then assures them the right to engage in peaceful nuclear power. I very much appreciate the Prime Minister's insights obviously as a neighbor of Iran and as someone who is interested in seeing this issue resolved in a peaceful fashion.

Beyond those two specific issues, we had a wide-ranging conversation about our continued support of counterterrorism efforts, including the efforts that are taking place in Turkey with respect to the PKK. We are very supportive of making sure that the kinds of terrorist attacks that we've seen in the past are not occurring. I congratulated the Prime Minister on the efforts that he's made within Turkey to protect religious minorities. I am pleased to hear of his decision to reopen the Halki Seminary.

We discussed our joint NATO efforts, and I look forward to welcoming him to my hometown of Chicago to discuss the transition process in Afghanistan, to provide support for an effort within Afghanistan so that they can provide for their own security and a stable government that's representative of its people and provides them with opportunity and prosperity.

And we discussed some of the important humanitarian efforts that are being made jointly in places like Somalia.

So the bottom line is that we find ourselves in frequent agreement upon a wide range of issues. Our discussions are frank and honest, and I very much appreciate our collaboration. And I also appreciate the advice he gives me, because he has two daughters that are a little older than mine -- they've turned out very well, so I'm always interested in his perspective on raising girls.

PRIME MINISTER ERDOGAN: (As interpreted.) My dear friend, Barack, thank you very much for a very fruitful meeting today. The first topic that we discussed was Syria. We extensively evaluated the situation in Syria. Of course for a country like Turkey, which has a border of 910 kilometers with Syria, the events that are taking place in Syria is very close to us, and we feel it in our hearts and we're very encouraged to see some of the developments.

Our country has become a center of migration in that more than 17,000 people have had to come over from the Syrian side to Turkey as a result of the events in Syria. And we also see significant number of people who are killed, and there seems to be continuous action in terms of bombing and burning cities and settlement areas by headquarters and the need to do more of this.

And of course, as human beings, people with conscience, we cannot remain a spectator to these developments, which are things that we have to be doing something about within the framework of international law. And I'm also very pleased to see that our views in general very much overlap on this subject.

We've also had an opportunity to talk about, with respect to Syria again, developments in the region -- Iran, Russia, and China, in that context.

On my return from South Korea I will be visiting Iran, specifically on the issue of Syria. And I was hoping that we would have a chance to discuss that aspect as well, which we did today. And there are also developments in Iran which were important which we wanted to discuss, and those have also been discussed in our meeting.

We also had a chance to evaluate the situation with respect to Cyprus. Our hope is that we can achieve the desired future for Cyprus sooner.

A very, very important point has been that from the moment Barack became President we upgraded the status of our relations from a strategic partnership to a model partnership, which he also placed a lot of importance on.

A second meeting after the first one that was held in Washington will be held in Turkey in June this year to talk about those relations, which, in turn, in my opinion, will also lead to a significant increase once again for those relations.

And I also told you about my daughters.