Six items of consensus with Obama 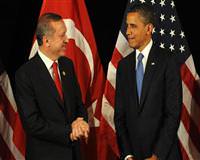 Syria was the main agenda in a meeting between Prime Minister Erdoğan and U.S. President Obama. While Erdoğan says, "It is impossible to remain a spectator to what is transpiring in Syria,” the two leaders reached a consensus on the issue of providing humanitarian aid.

Prime Minister Tayyip Erdoğan and U.S. President Barack Obama met on Sunday ahead of a nuclear security conference in South Korea. The meeting which was held at the Hyatt Hotel, where Obama stayed in Seoul, went on an additional 15 minutes than scheduled as the two leaders spent an hour and 45 minutes primarily discussing the developments in Syria. Erdoğan was joined by Foreign Affairs Minister Ahmet Davutoğlu, AK Party Deputy Chairman Ömer Çelik, Deputy Chief of the General Staff Hulusi Akar and MİT Undersecretary Hakan Fidan.

HUMANITARIAN AID FOR SYRIA
Prime Minister Erdoğan and Obama reached a consensus on the issue of delivering humanitarian aid to Syria, the method of which will be determined in upcoming weeks. According to the agreement reached between the two leaders, establishing a buffer zone and a humanitarian aid corridor are alternatives being assessed. Erdoğan provided the following details in a press conference held after his meeting with the U.S. President.

'A CONSCIENTIOUS RESPONSIBILITY'
THEY ARE BOMBING WITH HELICOPTERS: It was a fruitful meeting. We discussed the situation in Syria. Turkey shares a 785 kilometer-long border with Syria. Our country has become one of the most important centers for migration. Up until now, over 17,000 of our Syrian brothers have sought shelter in our country. Of course, there is also the issue of the number of deaths transpiring. With bombing being conducted from helicopters, the death toll continues to increase.

WE CANNOT REMAIN SPECTATORS: And of course, as human beings, people with conscience, we cannot remain a spectator to these developments. This is our conscientious duty. We are trying to do something about this situation within the framework of international law and we will.

COLLABORATION AGAINST THE PKK
ON THE PRIME MINISTER'S IMPENDING TRIP TO IRAN: On my return from South Korea I will be visiting Iran, specifically to deal with the issue of Syria. And I was hoping that we would have a chance to discuss this development as well, which we did today. We've also had an opportunity to talk about Iran, Russia, and China in respect to Syria. We were especially pleased to see that our views coincide on the issue.

U.S. SUPPORT AGAINST TERRORISM: We also had the opportunity to discuss developments in Iraq, to see how we can create greater impetus towards establishing peace in Iraq. And I'm hoping that all efforts will in the end help contribute to instilling peace in Iraq.
We're also very pleased to see the United States stands with us in our fight against the PKK terrorist organization.

We also had a chance to evaluate the situation with respect to Cyprus. Our hope is that we can achieve the desired future for Cyprus sooner than later.

EMPHASIS ON MODEL PARTNERSHIP: An extremely important issue is that from the moment Barack became President, relations between Turkey and the U.S. have gained momentum and therefore we have upgraded the status of our relations from a strategic partnership to a model partnership. With the new steps taken, our trade volume has reached 20 billion dollars.

Prime Minister Erdoğan also offered an evaluation of the summit in Seoul: The United States is not in favor of military intervention in Syria and is offering logistic support for the public. We relayed our apprehensions regarding the Armenian issue and the Cyprus situation.

SYRIA: Our meeting with Obama was extensive and extremely productive. Including the press conference our meeting lasted two hours and 15 minutes. We primarily discussed Syria. At the initial stage the United States is not in favor of military intervention. However they are ready to offer logistic support to opposition groups and providing aid such as medicine and food supplies to the Syrian public, which they have already begun to an extent. They are not supporting the same approach as with Libya.

For us the situation is a bit different… We share an extensive border and we are also facing threat. In recent days both Aleppo and Azaz have been bombed from the air. As of now, we have accommodated 17,000 refugees and we are concerned these numbers may escalate exponentially, maybe even reaching 100,000. The Transitional Syrian National Council will be opening an office in Istanbul. Assad is facing serious difficulties in terms of both the national budget as well as his own personal finances. Sooner or later he will be gone and there will be no turning back. In the beginning of April we will be holding a Friends of Syria Group meeting in Istanbul. I am expecting Ban Ki Moon and Kofi Annan. The results of the Istanbul meeting will be significant, because a road map will be established for what will follow.

IRAN: There are two aspects to this issue. One is Syria and the other is the start of 5+1 negotiations. America perceives the issue as being in connection to nuclear weapons whereas Iran expresses their intentions as being nuclear energy… We expressed to Obama that we are prepared to host a 5+1 meeting in Istanbul and the U.S. will assess the proposal.

IRAQ: They are in favor of the Iraqi public determining their own future as of 2014. They do not agree with external intervention. Sectarian strife could have devastating results. Suicide bombs explode every day in Iraq, killing dozens. We cannot remain silent to this.

PKK: They expressed solidarity in the struggle against the PKK terrorist organization. They are also continuing their support on the Predator issue. First it was just one, and then it went up to two. They are now going to use all that they have.

CYPRUS: They said they were closely following the issue. We expressed that we no longer trust in Christofias and that he is trying to delay in order to get past the election. We have no hope left, however we will continue to struggle with patience. However, there is an end to that patience.

THE ARMENIAN ISSUE: We explained that the Minsk Group has been trying to reach a solution for 20 years, however has not yet done so. If we need to solve the issue via Azerbaijan we will do all that we can. I said "Russia and France and you should exert efforts on Armenia." I also said let's not let congresses, parliaments or in other words politicians take the place of historians. We have expressed our discomfort with the congress bill. This issue shouldn't come up every April.

The U.S. President extended an invitation to Prime Minister Erdoğan to attend the NATO summit in Chicago. Obama also offered his condolences for the recent loss of Turkish soldiers in a helicopter crash in Afghanistan.
.
This is a translation of an article originally written by Yahya Bostan.