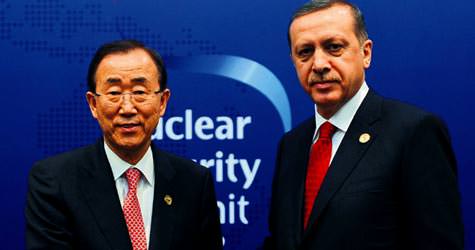 Syria was the main topic on the agenda in a series of meeting held by Prime Minister Erdoğan with a number of state leaders in Seoul. Also speaking with BM Secretary General Ban Ki-moon, Erdoğan stated, "The human rights violations in Syria have reached an extreme and we cannot remain spectators.”

Prime Minister Tayyip Erdoğan devoted a significant portion of his schedule to Syria on his second day in South Korea for the Nuclear Security Summit.

Erdoğan held a series of bipartite meetings in a special room set aside for the prime minister at the COEX Congress Center. In addition to Jordan King Abdullah, Erdoğan also met with Chilean President Sebastian Pinera, Pakistani Prime Minister Seyid Rıza Gilani, Italian Prime Minister Mario Montii and Kazakhstani President Nursultan Nazarbayev. Speaking to the various state leaders, Erdoğan expressed his concern for the developments in Syria and relayed the anticipation that the wave of refugees to Turkey will increase while also emphasizing that they cannot remain spectators to the unfolding events.

Erdoğan also fit in a meeting with UN Secretary General Ban Ki-moon during his very busy day yesterday. The surprise meeting, which was not included in Erdoğan's schedule, lasted for approximately half an hour. Forced to delay his meeting with Italy's Prime Minister Mario Monti, Erdoğan and Ban Ki-moon met in order to discuss the developments in Syria as well as the details of the prime minister's meeting with U.S. President Barack Obama. Providing information on the situation in Syria to Ban Ki-moon, Erdoğan stated, "The human rights violations have reached an extreme and we cannot remain spectators."

The efforts put forth by the U.N.- Arab League Special Envoy Kofi Annan was also brought up and Prime Minister Erdoğan expressed the sentiment that the latest ruling by the UN Security Council in regards to Syria was unsatisfactory and equating the Syrian opposition to a blood-shedding regime was not a fair approach. Erdoğan also criticized the fact that during his efforts, Kofi Annan did not make contact with regional actors nor did he pay a visit to the region. The Cyprus issue was also discussed during the Erdoğan-Ki-moon meeting.

HEADED TO PAKISTAN AND KAZAKHSTAN
During Prime Minister Erdoğan's meeting with the President of Chile, Sebastian Pinera offered his condolences for the Mavi Marmara raid and reminded that as a result Erdoğan's trip had been cut short and expressed that he was expecting the Prime Minister to visit Chile once again as soon as possible. Erdoğan responded by thanking him and stating that he would be evaluating the issue and would be paying a visit to Chile as soon as possible. When Israeli forces raided the Mavi Marmara ship, Prime Minister Erdoğan had to cut his trip to Chile short and returned to Turkey.

During Erdoğan's meetings with Pakistani Prime Minister Gilani and Kazakhstan President Nazarbayev he shared his plans to visit Pakistan on May 22nd and to be in Kazakhstan from May 23rd to the 24th. In addition to Foreign Affairs Minister Ahmet Davutoğlu, Erdoğan was accompanied by Economy Minister Zafer Çağlayan, Deputy Chief of General Staff General Hulusi Akar, MİT Undersecretary Hakan Fidan and Ambassador to Seoul Mustafa Naci Sarıbaş.