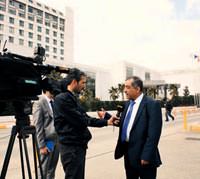 Members of the Syrian opposition gathered in Istanbul’s Pendik district to convene for two-days prior to the April 1st Friends of Syria Group meeting which will also be held in the metropolis.

Press Spokesman for the Syrian Revolutionaries Bessam Jaera states, "During the meeting, we discussed the overthrowing of Bashar Assad and the transition to a democratic regime." The meetings spread out over two days, were closed to the press. A number of Syrian opposition members were accompanied by consular staff from a variety of nations' embassies. During his press announcement, Jaera stated, "Even if the opposition unifies, the problems will not come to an end. The real issue is the fact that external forces such as Russia and China still support the current administration. The UN also doesn't support the Syrian public. We joined for our talks here solely in order to establish an objective. And that is to bring down the Assad regime and to establish a democratic administration chosen by the majority."

Ammar Qurabi from the National Change Current stated, "Despite all of our differences we are here in order to be a union. After a year since the start of the revolution in Syria we now aim at the very least to be unified. Despite all of the varied forces and opposition, we now feel the need to become a single unit. With the exception of a few small details, everyone has reached a consensus on the main framework. Everyone who attended the past two-days of deliberations has exerted effort to remain in a continuous dialogue. I think that we are now closer than we have ever been to reaching our objective."