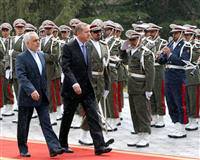 An official welcoming ceremony was held at the Sadabad Palace for Prime Minister Erdoğan upon his arrival to the Iranian capital. Greeted by Vice President Muhammed Riza Rahimi, Erdoğan offered his thanks for the welcome in Persian.

After holding a one on one meeting with Riza Rahimi followed by a meeting between committees, Prime Minister Erdoğan responded to questions at a press conference. In regards to the issue of nuclear negotiations with Iran being held in Istanbul, Erdoğan stated, "Mr. Salih has already expressed that deliberations should be held in Istanbul. During the nuclear summit in Seoul, there were positive developments on the issue regarding the other parties involved. At this stage, I think we need to wait for an announcement to come from them. We hope to contribute positively to this process. From the start, we have been in the position of being the third country to follow developments most closely."

When asked if there was any sort of imposition made by western nations in regards to nuclear energy, Erdoğan stated, "When it comes to the peaceful use of nuclear energy, no one has a right to make any sort of impositions. During the summit in Korea, the issue of handling nuclear power for public energy and military energy together was discussed. Of course, everyone with common sense is normally opposed to nuclear weapons. No one has the right or authority to impose anything on anyone with regards to nuclear energy for peaceful purposes."

Rahimi: We approve negotiations being held in Turkey

Meanwhile, the meeting between Prime Minister Erdoğan and Iranian President Mahmud Ahmedinejad that was scheduled for yesterday was postponed to today. Erdoğan will also be meeting with Iran's spiritual leader Ayatollah Ali Khamenei later today.