Erdoğan to Iran: “Nuclear energy should be used for peaceful purposes” 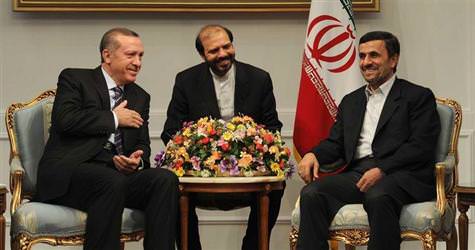 Prime Minister Recep Tayyip Erdoğan met with Iranian President Mahmud Ahmedinejad for a meeting that lasted an hour and a half and was closed to the press.

Prime Minister Erdoğan responded to questions from the press upon his departure from the Espinas Hotel, where he is staying in Iran, to meet with President Ahmedinejad. When asked whether or not it has been established that the 5+1 meeting, which is in reference to the planned negotiations with Iran and the UN Security Council's five permanent members USA, England, France, Russia and China as well as Germany , will be held in Istanbul, Erdoğan responded by stating, "nothing has been finalized yet."

Erdoğan was also asked, "It is known that Iran's stance against Syria differs, was it possible at all to align views?" The Prime Minister responded by stating, "Let's see, we are working on it. It is now about to turn around. It wouldn't be premature to say anything before we hold meetings. Our meetings here were primarily economy-based."

According to the information obtained, during Erdoğan's meeting with Ahmadinejad, the Prime Minister reiterated Turkey's stance on the use of nuclear energy for peaceful purposes.

Prime Minister Recep Tayyip Erdoğan also met with Iran's spiritual leader Ayatollah Ali Khamenei in his office, located in one of the most significant religious sites in Tebriz, the 'Harem-I Imam Reza'. Erdoğan and Khamenei met for a total of two hours both one on one as well as with mutual committees. According to the information obtained, the meetings held were extremely positive and a number of topics were discussed. Foreign Affairs Minister Ahmet Davutoğlu, Economy Minister Zafer Çağlayan, Minister of Energy and Natural Resources Taner Yildiz, Minister of Environment and Urbanization Erdoğan Bayraktar, AK Party Deputy Chair Omer Çelik, Ak Party Ankara Deputy Yalçin Akdoğan, MİT Undersecretary Hakan Fidan.
Visiting Imam Reza's Tomb
Prime Minister Erdoğan and his accompanying committee paid a visit to Imam Reza's Tomb prior to meeting with Khamenei. The Harem-i Imam Reza, which is the largest mosque in Tebriz, also houses the tomb of Imam Reza, who according to Shiite beliefs is from the Prophet's lineage and is the eighth imam of the Twelver Shiites. Sunni's also have high regard and much respect for the religious scholar.