Istanbul meeting to denounce Assad as representative of the Syrian public 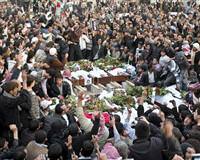 The Syrian National Council is soon to be named the ‘sole representation’ of the Syrian public at the upcoming Friends of Syria Group meeting to be held In Istanbul this Sunday.

While deliberations are still ongoing regarding what the final declaration to come out of the April 1st Friends of Syria Group meeting will precisely entail, the following items are expected to be signed by the group on Sunday:

Turkey's Damascus Ambassador Ömer Önhon has being working on organizing the Syrian opposition. Meanwhile, during his meetings in Iran, Prime Minister Tayyip Erdoğan regularly reminded that at this stage, Syrian State Leader Bashar Assad has lost all credibility.

One of the objectives for the meeting in Istanbul will be to increase pressure on the Assad administration as well as on those nations that support the current regime.

Support for the Annan Plan will be emphasized.

A joint call will be made for the supply of humanitarian aid to Syria. Following a presentation by UN Secretary General Ban Ki-moon to Annan's Security Council on Monday, the plan is to present a proposal to the UN which is solely focused on the delivery of humanitarian aid. Negotiations in Istanbul will also focus on a decision included in the draft which foresees the creation of an aid fund, however how this aid will be delivered and to whom is still an item of debate.

The issue of applying further sanctions on the Assad regime will also be discussed during the Istanbul meeting. The primary objective is to tighten Assad's financial reins.