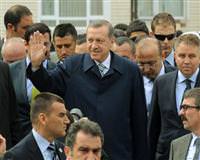 Prime Minister Erdoğan relayed details on his recent trips to both South Korea and Iran during a press conference upon his arrival to Ankara last night.

Prime Minister Recep Tayyip Erdoğan relayed that the Iranian Spiritual leader Khamenei explicitly stated, 'According to our sharia, our law, weapons of mass destruction cannot be used. There is no place for nuclear weapons in our religious beliefs.' Iran openly states that we do not have nuclear weapons," explains Erdoğan who goes on to state, "They should open an international inspection on everyone. I delivered this very same message to U.S. President Obama. I asked him; don't they have the right to establish a nuclear program for peaceful purposes? If Iran has the right to use nuclear energy just like everyone else, then global states need to act fairly. The international community is against nuclear weapons, not nuclear energy. Let's altogether take a look at the nations that have nuclear weapons. The world needs to act in fairness to everyone. Israel's stance is obvious at the moment. Israel has a significant number of nuclear warheads that are not kept for peaceful purposes. The West needs to hold Israel accountable. There is no need to draw attention somewhere else when one country already owns nuclear warheads. Israel needs to be rid of nuclear weapons and international society must take an initiative on the matter.
Last Update: Mar 30, 2012 8:52 pm
RELATED TOPICS