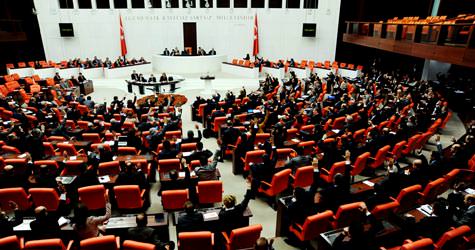 Prime Minister Erdoğan made an announcement following the acceptance of legislation on education reforms in which he stated, “Through democratic means, the previously imposed regulations have now been rectified. The former prohibitive outdated education system, which was the work of a small minority attempting to rule the majority, has been eradicated. Today marks the day that regulations brought on by a fascist regime have been corrected through an entirely democratic route.”

The four day marathon spent by Turkey's Grand National Assembly on the deliberations of education system reforms, came to a close yesterday evening. New legislation, referred to as the 4+4+4 system, which divides the education system into three stages and increases the mandatory number of years for education up to 12, was passed by the General Assembly.

The era in the education system which was enforced by the infamous February 28th military memorandum, which made only eight years of education mandatory, has come to an end. According to the 4+4+4 reforms, mandatory education will now be conducted in three stages for a total 12 years. After a 44-hour marathon which was spread out over four days, the General Assembly approved the 27-item proposal and then moved on to a vote. Out of 387 deputies who voted, 295 accepted the legislation, while 88 votes from CHP and three votes from BDP were against the new reforms. With the exception of one, MHP deputies chose to not take part in the vote.

Following the acceptance of the new legislation, Minister of National Education Ömer Dinçer gave a delivery thanking the deputies who participated in the vote. "Today is a very important day for us. With the legislation that we have passed here today, Turkey's education system, which up until now consisted of strict standardization, will soon take on a more democratic and flexible structure. Instead of bringing up children in a standardized single mold, we have now taken steps that will ensure our children are brought up to be able to rival the world, in a manner befitting our needs and expectations. We will be establishing the groundwork for every child to be brought up as individuals and to be educated based on their individual talents and potential. Today, our public and state have become one step closer and reunited."
WHAT DO THE NEW REFORMS ENTAIL?
The new mandatory primary education system will encompass children from the age of 6 to 13. Children will begin their primary education in the first month of September following their sixth birthdays and will come to a close during the school year in which students turn 14 years old.
The primary education stages, which includes the first two stages of four years' education each, will entail four years of mandatory elementary education, followed by an additional mandatory four years of middle school education, in which students will be able to choose whether they want to study at a general education middle school or a religious vocational middle school, which are referred to as Imam Hatip schools. After being shut down as part of the strict regulations enforced during the February 28th 'postmodern coup', the new legislation includes the reopening of Imam Hatip middle schools.
Primary education establishments will be set up separately as independent elementary schools and middle schools.
Courses on the Koran and the life of the Prophet will be offered as electives for middle school and high school students. The Ministry of Education may also prepare elective courses on Christianity and Judaism.
Middle school education will be made mandatory beginning in the 2012-2013 school year.
The coefficiet system, in which vocational students were granted four extra points for selecting to follow their career path in the university placement exam, will be lifted for students beginning vocational high schools next year.