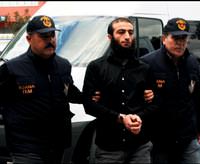 Police have arrested twelve members, including a group leader of the Al-Qaeda terrorist organization.

Teams from Adana's Anti-Terrorism Department took action after technically and physically tracking the organization and staged a simultaneous operation on five addresses. Teams gathered in the gendarmerie station located in the Yüreğir district's Doğankent County and from there staged a simultaneous on five previously determined addresses. Five arrests were made in the operations. Meanwhile, one woman, whose home was being searched by security forces, began throwing logs of wood at journalists from her balcony.

Teams from the Izmir's Anti-Terrorism Department also staged simultaneous operations in a variety of districts directed at a group suspected of forming an Al-Qaeda cell. In addition to, the group's alleged 36-year-old leader, six arrests were made in the raids. Police also confiscated one gun, one rifle and one sword, in addition to other materials pointing to the cell's organization.