Farewell to the last Ottoman 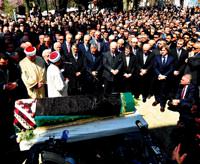 Neslişah Sultan, the final member of the Ottoman Dynasty to be listed in the official registry, was laid to rest yesterday in a funeral ceremony that was widely attended by her relatives, members of the state as well as the public.

The funeral ceremony for Neslişah Osmanoğlu, who passed away from a heart attack at the age of 91 in her home in Ortaköy, washeld at the Hamidiye Mosque, which was commissioned by Abdul Hamid II. Following the prayer ceremony, Neslişah Osmanoğlu was laid to rest at the Aşiyan Cemetery. Neslişah Sultan's death marks the end of the Ottoman Dynasty. At the ceremony, Osmanoğlu's niece Hanzade Özbaş stated, "The Ottoman Dynasty has come to an end, however the family still lives." The Hamidiye Mosque, which is located near the Yıldız Palace in Beşiktaş, was especially selected by the family for being commissioned by a sultan. Family and fans from the public filled the mosque's courtyard, while a significant number of wreaths were sent by President Abdullah Gül, Speaker of the Assembly Cemil Çiçek as well as a number from a number of establishments.

Speaking at an AK Party group meeting, Prime Minister Erdoğan stated, "Neslişah Osmanoğlu was symbol of nobility who shared the blood of Ertuğrul Gazi, Fatih Sultan Mehmet and Sultan Süleyman."Neslişah Osmanoğlu, the granddaughter of both the last caliph Abdülmecid and the final Ottoman Sultan Vahdettin and the oldest member of the Ottoman dynasty, passed away the day before yesterday at the age of 91.

Neslişah Sultan's nephew and fourth generation grandson of Abdülhamid, Abdülhamid Kayıhan Osmanoğlu explained that his aunt lost her life from a heart attack. "She passed away in her home in Ortaköy. Her daughter was with her at the time. Her son, who was abroad, has now arrived. We are expecting her other family members to come as well." Referred to as "Sultanefendi", Neslişah Sultan was the final individual listed in the Ottoman dynasty's registry. Born on February 4th, 1921 in Sabiha Sultan's residence in Nişantaşı, Istanbul, Neslişah Sultan's father Şehzade Ömer Faruk Efendi was the son of caliph Abdülmecid. Her mother, Sabiha Sultan was the daughter of the last Ottoman Sultan Vahdettin. She was the last person added to the Ottoman registry and 121 cannons were set off for her birth. The sultan printed currency in her name.

Neslişah Sultan lived in Dolmabahçe Palace until she was three, then in 1924 her family was exiled to France. Just prior to boarding the train that was going to take the family into exile; she hid behind a curtain at the station and cried, saying, "I want to go home."

Neslişah spent her childhood in France and later on in her youth, she went to Egypt with her family. In 1940 she married Prince Muhammed Abdülmunim, the son of the last khedive Abbas Hilmi Paşa. She brought two children into the world, Prince Abbas Hilmi and Princess İkbal.

Following the Egyptian coup in 1952, her husband was made regent and she became 'Egypt's First Lady'. After the establishment of the republic, she and her husband were accused of taking part in an international conspiracy against the Egyptian government. After trials that went on for months, she was acquitted and granted permission to leave Egypt. This being her second exile, Neslişah Sultan and her husband settled in France. Meanwhile in 1952, an amnesty was granted in Turkey for princesses, referred to as sultans, from the Ottoman dynasty. In 1963, Neslişah Sultan reclaimed her Turkish citizenship and took on the "Osmanoğlu" surname. From then on, she resided in Istanbul.

AN ATHLETE, FLUENT IN FOUR LANGUAGES

Neslişah Osmanoğlu was fluent in French, English, German and Arabic and was also an avid skier, swimmer and equestrian. She was also interested in history, literature, geography, botany and the culture of cuisine. Prof. Dr. İlber Ortaylı has referred to her as, "being an official representative of the Ottoman dynasty, whose birth was greeted with cannons. She was extremely cultured; she knew a few languages extremely well and was highly respected by a number of significant conductors in the music world."

In the 2006 documentary entitled The Last Ottomans, Neslişah Sultan stated the following: "We grew up longing for our homeland when we lived in exile. I used to ask my mother's friends who would come and go from Istanbul if they would bring me a handful of soil from Istanbul, however unfortunately no one ever did so. Now, when I enter the streets, I see that whatever is beautiful was made by my grandfathers. I feel pride and understand even better how much I belong here."

President Gül delivered the following message upon hearing of Neslişah Sultan's death: "I felt deep sorrow to hear of the death of Neslişah Osmanoğlu, the oldest member of the Ottoman Dynasty which founded the Ottoman State, which was transformed into a universal empire, an era which has made its mark on both Turkish and world history.

Prime Minister Erdoğan: I heard the news with great grief…

In a message released by Prime Minister Erdoğan he states, "I heard of Neslişah Osmanoğlu's death with great grief. May the late Neslişah Osmanoğlu rest in the Mercy of God and I offer my condolences and pray for peace to those family members she has left behind."