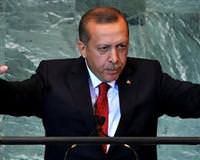 Prime Minister Erdoğan delivered a harsh message to the Iranian administration after its announcement proposing nuclear negotiations be held in Damascus or Baghdad instead of Istanbul.

In a press conference, Prime Minister Tayyip Erdoğan responded to questions on Iran's recent announcement inferring that they did not favor negotiations being held in Istanbul.

Erdoğan qualified Iran's proposal to hold negotiations in Damascus or Baghdad as being in vain, also mentioning that the wording used in this announcement was not compatible with diplomatic language. "Holding these meetings in Istanbul does not win us prestige. Iran would be the ones to benefit. We have to be honest. They are losing their own respectability because of the lack of honesty. This is not the language of diplomacy, this is the language of something else, and that does not suit me. The offer going round at the moment, Damascus or Baghdad, is a waste of time, it means it won't happen, because they know the other side won't come to Damascus or Baghdad," Erdoğan stated during the news conference in Ankara.

Erdoğan also touched upon Syria and the fact that although the Damascus administration has expressed intentions to follow Annan's plan, operations are still ongoing by stating, "These are mechanisms of deception".

Erdoğan went on to state: "Bashar's statements that he has withdrawn his troops and tanks have now become qualities of his we have become used to. From here on out, we will just have to wait until April 10th and see whether his actions are sincere. April 10th, as you know, is the final date determined by Mr. Annan."

'NO REQUEST FOR TURKEY'S MILITARY'

When one journalist asked Erdoğan whether or not a request had been made by Annan for Turkish soldiers to serve as watchdogs, Erdoğan responded, "We have not received such a request."