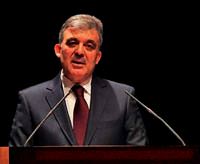 Delivering a conference to officers at the Military Academy Command, President Gül expressed that Turkey does not have the luxury to remain distant spectators to developments and stated, “Diplomatic activism and military preparedness is not an option, it is a necessity.”

President Gül, who also delivered a conference at the Military Academy Command's War Games and Culture Center in 2010, was greeted with a military ceremony by Chief of General Staff Necdet Özel, National Defense Minister İsmet Yılmaz and Military Academies Commander General Arslan Güner. Gül's conference to army officers lasted approximately one hour, and the following are a number of pertinent topics touched upon by the president.

We are witnessing an era which will lead the way to a new restricting of the international system in terms of politics, economy and the military. We are currently experiencing a period of time in which the balance of power between continents and countries is transforming and where the flow of history is accelerating. During times like this there are just as many serious risks as there are enormous opportunities.

The most important development in terms of change is the public uprisings experienced in the Middle East and North Africa. The Arab Spring, which I correlate to the 1848 and 1989 revolutions in Europe, has actually begun an overdue however extremely powerful era from which there is no turning back. This period will be a source of inspiration for a number of nations longing for justice and liberty throughout the world, especially in the Middle East. This era will continue to transform the world in the years to come.

Fraternal nations, in Tunisia, Egypt, Libya and Yemen have overturned their own dictators. In Syria, people continue to risk their lives fighting for freedom, justice and honor. The walls of fear have been taken down. No regime has the luxury any more of ruling from behind an iron curtain.
After the movements in the Middle East, it will be difficult from here on out to seek the source as being ideologically motivated or based on foreign pressure.

The bloodshed continues in Syria, Iraq is experiencing sectarian based political instability, while the tension surrounding Iran's nuclear program could lead the way to conflict. While regional and global forces rehearse, there is the intent to set the stage for a new Cold War in this environment of instability.
Should the tension in the region transgress to conflict or civil war, the surfacing of new ambiguity or an environment of chaos would be a high probability. Under these conditions, Turkey does not have the luxury of watching the developments from a distance. While we prepare ourselves to be ready for any sort of negative scenario, at the same time we are also obliged to take advantage at a small scale of all opportunities granted by diplomacy in order to prevent such a disaster. Therefore for Turkey diplomatic activism and military preparedness is not an option it is necessity.

A WARNING OF APARTHEID

In the new political climate, Israel is the nation that needs to be followed and analyzed the closest. If Israel does not allow the creation of an independent Palestinian state, then within 50 years time the country will have turned into an apartheid regime.
It is not possible for a large population governed under democracy to be led forever by a smaller minority. Therefore, Turkey has always called on Israel to end its strategic myopia, carefully analyze the situation and take steps for peace that will truly ensure security.
This is a translation of an article originally written by Hasan Ay.